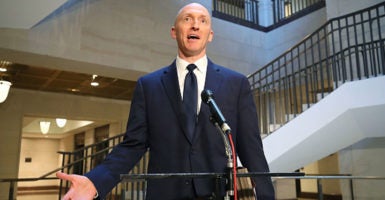 Carter Page, former adviser to the Trump campaign, speaks to reporters Nov. 2, 2017, after testifying before the House Permanent Select Committee on Intelligence. The Justice Department launched an investigation a year ago into how the FBI obtained a warrant to spy on Page before the election. (Photo: Mark Wilson/Getty Images)

Huber, who oversees federal prosecutions in the District of Utah, is working collaboratively in the internal investigation with Justice Department Inspector General Michael Horowitz.

“There is no evidence a real investigation is taking place,” the head of one legal watchdog group told The Daily Signal.

The government’s inspectors general don’t have prosecutorial authority, but Huber brings to his investigation the tools of a federal prosecutor, including the ability to issue subpoenas.

The mission: to investigate government spying on a former Trump campaign aide, Carter Page, and other questionable actions by the Justice Department that led up to Mueller’s probe of Russian interference in the 2016 election—and allegations that the Trump campaign colluded with Moscow.

But in March 2018, then-Attorney General Jeff Sessions, in consultation with Deputy Attorney General Rod Rosenstein, appointed Huber to oversee a probe that included potential abuse of the Foreign Intelligence Surveillance Act by the Justice Department and the FBI.

Since his appointment, Huber’s investigation has been a complete mystery, said Peter Flaherty, president of the National Legal and Policy Center, a conservative government watchdog group.

“There is no evidence a real investigation is taking place,” Flaherty told The Daily Signal. “We don’t have a grand jury. It doesn’t seem key witnesses were interviewed. There is certainly no evidence he has staffed up. What he is up to is a mystery.”

Flaherty said he agrees with Graham and others who support appointment of a new special counsel to look into how and why federal officials targeted Trump and his associates before and after his election victory over Hillary Clinton.

Trump said Wednesday in an interview with Fox News Channel’s Sean Hannity that he would declassify and release the FISA information to the public now that Mueller has completed his report, which determined that the president and his campaign did not conspire with Moscow.

The U.S. Attorney’s Office for the District of Utah deferred questions on Huber’s investigation to the Justice Department’s Office of Public Affairs.

Justice Department spokeswoman Kerri Kupec told The Daily Signal that there is no update at this point on the work of Huber and the inspector general.

The Justice Department has no comment on Graham’s call for a new special counsel, Kupec said.

The biggest difference between a special counsel and a special investigator within the Justice Department such as Huber would be the degree of focus, said Charles “Cully” Stimson, a former federal prosecutor.

“John Huber is a Senate-confirmed U.S. attorney,” Stimson, manager of the national security law program at The Heritage Foundation, told The Daily Signal. “He has additional duties.”

By contrast, a special counsel has only one investigation to worry about.

“A special counsel’s sole mission comes in their appointment letter,” Stimson said. “After that investigation is over, their office ceases to exist.”

In a list of press releases over the past year for the Office of the U.S. Attorney for the District of Utah, Huber doesn’t appear to be uninvolved in Utah matters.

He is quoted in releases that address prosecutions of firearms violations, drug busts, settlement in a forest fire, consumer fraud schemes, an espionage case, and even Sessions’ forced resignation in November.

Huber’s investigative plate is thought to include:

1. FISA Abuse. Sessions appointed Huber just days after the Justice Department’s Office of Inspector General announced it was investigating how the FBI applied for a warrant under the  Foreign Intelligence Surveillance Act to spy on Page, the former Trump campaign aide.

The FBI obtained a warrant with paperwork that relied heavily on an unverified opposition research document—known as the Christopher Steele dossier—that was funded by Hillary Clinton’s 2016 presidential campaign and the Democratic National Committee.

A declassified memo from the House Select Committee on Intelligence alleged that FBI and Justice officials did not fully inform the special FISA court that information used in seeking the warrant to spy was based on a political document. Former top FBI officials, including former Director James Comey and his deputy, Andrew McCabe, also could face legal scrutiny.

2. Uranium One. The Russia-connected firm, Uranium One, which had close ties to the Clinton Foundation, is also part of Huber’s probe. During his Senate confirmation hearing earlier this year, Barr said Huber was investigating the matter.

Uranium One contributed $2.4 million to the Clinton Foundation during Hillary Clinton’s four-year tenure as secretary of state under Obama, The New York Times reported in 2015. Figures associated with Uranium One also paid $500,000 to her husband, former President Bill Clinton, to speak in Moscow.

In a 2010 deal approved by a U.S. government committee, including Hillary Clinton and eight other members of Obama’s Cabinet, a Kremlin-connected entity obtained 20 percent of America’s uranium production by acquiring Uranium One from a Canadian company.

“My recollection of that, I think it was relating to a letter and the appointment of Huber in Utah to look into a number of things,” Barr told the Senate Judiciary Committee.

“The point I was trying to make there was that whatever the standard is for launching an investigation, it should be dealt with evenhandedly. Whatever that trigger is should be applied to all,” he said.

“I have no knowledge of the Uranium One [deal]. I didn’t particularly think that was something that should be pursued aggressively.”

3. Media Leaks. Acting on the recommendation of the Justice Department’s Office of Professional Responsibility, Sessions fired McCabe as FBI deputy director after he was found to have lied to the inspector general about leaks to the news media.

McCabe said Comey authorized media leaks, but the former FBI director testified under oath to the Senate Judiciary Committee that he did not leak or direct others to leak.