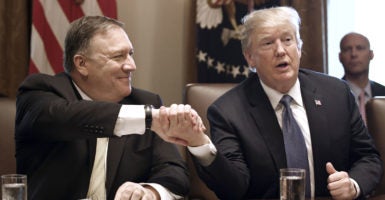 “American taxpayer dollars will not be used to underwrite abortions,” Secretary of State Mike Pompeo says of new restrictions on foreign aid. Pictured: Pompeo and President Donald Trump during a June 21, 2018, meeting at the White House. (Photo: Oliver Douliery/AFP/Getty Images)

Secretary of State Mike Pompeo has announced two key moves by the Trump administration that he said would “ensure that U.S. taxpayer dollars are not used to subsidize or promote abortions.”

The United States spends about $9 billion a year on global health care programs, and President Donald Trump is determined that taxpayers’ dollars not go to foreign organizations that support or provide abortions, Pompeo told reporters Tuesday in the White House briefing room.

In his first month in office, Trump reinstated the so-called Mexico City policy under which President Ronald Reagan in 1984 pursued the same objective.

Then, in May 2017, Trump signed an executive order expanding the policy.

The new change announced Tuesday closes a loophole so that foreign, nongovernmental organizations can’t accept U.S. aid and give it to other foreign entities that promote or perform abortions.

With the change, Pompeo said, the United States will be able to “enforce a strict prohibition on backdoor funding schemes and end-runs around our policy.”

Bill Clinton and Barack Obama, both Democrats, rescinded the policy, while Republican George W. Bush restored it in the eight years between those two.

“This administration has shown that we can continue to meet our critical global health goals, including providing health care for women, while refusing to subsidize the killing of unborn babies,” Pompeo said.

“American taxpayer dollars will not be used to underwrite abortions,” the secretary of state added.

Pompeo also announced full enforcement of the Siljander Amendment, which prohibits the use of “U.S. funds, including foreign assistance, to lobby for or against abortion.”

“The United States can support global health programs without assisting, in any way, entities that are engaged in the abortion industry,” James said Tuesday, adding:

Thanks to the secretary’s leadership, we will no longer tolerate foreign organizations accepting U.S. taxpayer dollars in one hand while giving them to organizations that perform or promote abortion with the other.

I am also grateful that the State Department will fully enforce federal policy that ensures U.S. taxpayer dollars are not used to lobby for abortion in other countries. Public policy must always respect the rights of the most vulnerable and innocent among us, including the unborn.