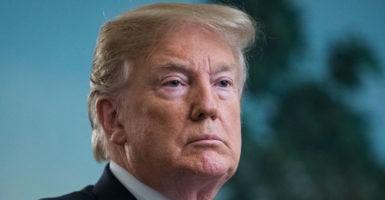 The saga that is the Mueller report is a consequence of what happens when you begin with a conclusion and then desperately seek evidence you hope will confirm it.

The conclusion: Donald Trump was illegitimately elected and that he and/or his campaign conspired with the Russians to undermine Hillary Clinton’s presidential candidacy.

A summary of the report delivered to Congress Sunday by Attorney General William Barr says special counsel Robert Mueller “found no evidence President Donald Trump’s campaign ‘conspired or coordinated’ with Russia to influence the 2016 presidential election but reached no conclusion on whether Trump obstructed justice.”

The president claimed “full exoneration.” Democrats claim Mueller only suggested there was insufficient evidence to prove obstruction of justice and that, as the report says, “It does not exonerate him.”

Democrats will have a hard time making that case with the public because of their stalwart defense of former FBI Director James Comey who said of Hillary Clinton and her email server, “Although we did not find clear evidence that Secretary Clinton or her colleagues intended to violate laws governing the handling of classified information, there is evidence that they were extremely careless in their handling of very sensitive, highly classified information.”

So committed are Democrats to their narrative that Trump is crooked, unfit, unqualified, unstable, and unsuitable for the presidency that no amount of evidence to the contrary will keep them from continuing investigations.

House Judiciary Committee Chairman Jerrold Nadler, D-N.Y., says he intends to ask Barr to testify before his committee. We can expect plenty of grandstanding by Democratic committee members if that happens.

This is all the Democrats have, other than their presidential candidates promising the moon along with higher taxes to help them reach their impossible social dream.

As The Wall Street Journal noted in a Saturday editorial:

Starting about the time of Donald Trump’s inauguration in January 2017, the press ran story after story based on anonymous ‘intelligence sources’, purporting to establish links between the Trump presidential campaign, or various individuals in the Trump orbit to, well, to what was never exactly clear—whether Vladimir Putin himself or ‘the Russians.’ This in turn led to multiple congressional investigations, much of them centered on the FBI’s handling of these matters.

As a result of the Mueller probe, several key Trump advisers have admitted crimes or have been convicted since the election, writes The Guardian—George Papadopoulos, Michael Cohen, Michael Flynn, Rick Gates, and Paul Manafort.

Manafort, Trump’s former campaign chairman, was recently sentenced on tax and bank fraud charges that date back before the 2016 campaign. Trump was not implicated.

The Mueller investigation is estimated to have cost the U.S. taxpayers about $25 million. Given the results, the report is not worth the expenditure.

The full report should be released as soon as possible, but even that is unlikely to satisfy Democrats, many of whom hate the president and look for any opportunity to harm him politically. But the report won’t stop the U.S. attorney for the Southern District of New York, whose office is investigating Trump’s businesses prior to and even after becoming president.

Nothing will stop the Democrats from coming after the Trump administration.

One is reminded of what Sir Winston Churchill said in a different context after a small British victory near the start of World War II: “Now this is not the end. It is not even the beginning of the end. But it is, perhaps, the end of the beginning.”

That will likely be the mantra of Democrats leading up to the 2020 election. They have only just begun. Voters will have the last word and it may harm Democrats if the president is seen as being persecuted for partisan reasons.