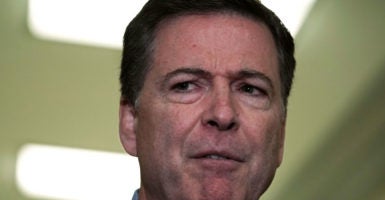 James Comey, former director of the FBI, claimed in an op-ed Thursday that he doesn’t care one way or the other whether special counsel Robert Mueller finds evidence that President Donald Trump conspired with Russia to influence the 2016 election or obstructed the FBI’s collusion probe.

But the claim, which Comey made in The New York Times, is at odds with his testimony about his actions shortly after being fired by Trump in May 2017.

Comey testified to the Senate Intelligence Committee in June 2017 that he leaked memos he wrote after conversations with Trump in order to force the appointment of a special counsel.

“I asked a friend of mine to share the content of a memo with the reporter. I didn’t do it myself for a variety of reasons, but I asked him to because I thought that might prompt the appointment of a special counsel,” Comey testified June 8, 2017.

Comey instructed his friend, Daniel Richman, to give the Times a memo he wrote about a conversation he had with Trump on Feb. 14, 2017. Comey claimed Trump asked him to shut down an investigation of former national security adviser Michael Flynn.

Comey’s ploy worked, as Mueller was appointed special counsel May 17, 2017.

Though Comey clearly pushed for the special counsel’s probe, he now says he has no preference as to what Mueller will write in a report of the 22-month-long investigation.

“Even though I believe Mr. Trump is morally unfit to be president of the United States, I’m not rooting for Mr. Mueller to demonstrate that he is a criminal,” Comey wrote in his op-ed.

“I’m also not rooting for Mr. Mueller to ‘clear’ the president. I’m not rooting for anything at all, except that the special counsel be permitted to finish his work, charge whatever cases warrant charging, and report on his work.”

Comey, who oversaw the FBI’s collusion investigation for more than nine months until his firing, said that he has “no idea” whether Mueller will conclude that Trump knowingly colluded with Russia. He said he does not know whether Trump obstructed justice.

“I care only that the work be done, well and completely. If it is, justice will have prevailed and core American values been protected at a time when so much of our national leadership has abandoned its commitment to truth and the rule of law.”

Comey also said in the op-ed he does not want to see Trump impeached. Instead, he said he hopes Trump is voted out of office in 2020.