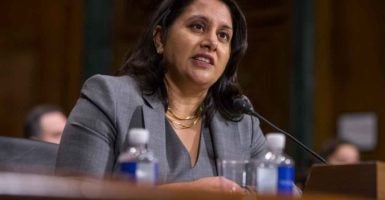 The Senate has confirmed Neomi Rao to the U.S. Court of Appeals for the D.C. Circuit. She’s exactly the kind of impartial judge that we need across the judiciary. That makes 91 judges overall, and 36 to the federal appeals court, since President Donald Trump took office.

Whatever those numbers mean on their own, the fact is that Trump’s judicial nominees are being treated very differently than those of previous presidents.

Those 91 judges, for example, have received a total of 1,824 votes against their confirmation in 782 days. When Barack Obama was president, it took 2,123 days to rack up this many negative votes, and he had to appoint 282 judges to do it.

Trump’s 91 judges have received more negative confirmation votes than the 2,653 judges confirmed to the same courts during the entire 20th century combined.

Let’s look at this another way. Obama appointed 16 judges to the U.S. Court of Appeals during his first two years, when his own party controlled the Senate. Each of those nominees had a confirmation vote, and only two also had a separate vote to invoke cloture, or end debate.

Trump had appointed 16 judges to the U.S. Court of Appeals by May 2018, when his own party controlled the Senate. Each of those nominees had a confirmation, and all 16 also had a separate cloture vote.

Since several studies (here, here, here, and here) have found that the ABA is systematically biased against Republican nominees, that really puts Trump’s nominees ahead.

No matter how you slice or dice it, no matter what measure or standard you use, the judicial confirmation process today is radically different than it was just a few years ago.