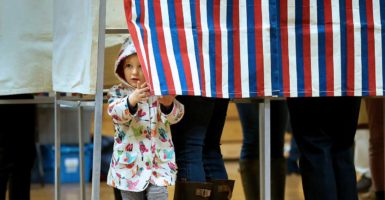 The left really wants to give kids the right to vote.

This idea is so popular on the left that a majority of House Democrats voted in favor of lowering the voting age to 16.

Why would Pelosi and others on the left want to give high school children—hardly known for deep wisdom and sound judgment—a vote?

A new poll perhaps demonstrates why.

The Harris Poll, released exclusively by Axios, shows that roughly half of young Americans say they would prefer living in a socialist country.

It also reveals that many young Americans think the government should provide free health care, education, and medicine, among many other things.

This is very much in line with a poll released in late 2017 by the Victims of Communism Memorial Fund that found similar support for communism among young people, along with widespread ignorance about what communism is.

Most of those surveyed couldn’t define communism or socialism. Many believed, for instance, that President George W. Bush killed more people than Josef Stalin, the ruthless Soviet dictator whose regime murdered tens of millions.

The fact is, socialism attracts widespread support from millennials and members of Generation Z who at the same time are ignorant about socialism.

It’s no wonder that left-wing groups are desperately trying to find ways to get children to vote or be used as useful tools for their agenda, which now appears to include outright socialism.

While young people embrace at least the word “socialism” in disproportionately high numbers, Americans as a whole find the term toxic, as far as who they’d be willing to vote for.

According to a recent NBC/Wall Street Journal poll, just 25 percent of respondents found “socialist” to be a desirable trait for a presidential candidate. It was among the least-liked traits in the entire poll.

Perhaps America’s older cohorts simply have a better understanding of what socialism is, having lived through the Cold War and faced the existential crisis of the Soviet threat to our country.

Young people, born after the fall of the Berlin Wall, have less of a real-world example to draw on in relation to the evil that socialism creates for a society that adopts it in total.

It’s clear that in the debate over socialism, education is where we have failed. A generation or generations of young Americans are falling under the impression that socialism, whatever they think it is, will bring more prosperity.

History, of course, demonstrates the opposite.

The reason America is so prosperous, and why it remains a place where so many people around the globe aspire to live, is because it rejected these ruthlessly collectivist doctrines.

Our nation held tightly to the ideas of the rule of law, private property, and the Constitution, all of which do far more for the common citizen than the doctrines of socialism, which put absolute power in the hands of a few.

Yet, our education system is failing to transmit those basic ideas to upcoming generations, a failure that this country desperately needs to change if we are to remain a free country.

In a recent survey of how Americans perform on a basic citizenship test, most failed and young people fared by far the worst.

This ties back into the the current debate over voting age.

It’s a good thing that young people participate in politics, develop an instinct for informed citizenship, and take the future of the country seriously.

However, we shouldn’t fetishize youth as itself an advantage, especially when it comes with such a disturbing lack of understanding about history and civics.

The left has a sort of Rousseauian concept of young people as being free from the shackling norms of civilization, as being capable of drawing from wisdom unclouded by the built-up prejudices of experience.

But the demands of citizenship are not fulfilled by mere youthful energy. They require an education in civics, an understanding of our institutions, a certain independence of thought and action.

At the same time progressives demand the lowering of the voting age, we increasingly infantilize young Americans, who are not really seen as “adults” until the age of 26, long after most graduate college.

From smoking to gun ownership, progressives are stripping the rights and life choices of young adults.

Meanwhile, they demand that we put increasing power in the hands of 16-year-olds to determine our leaders and laws.

This has things entirely backward.

At a time when society seems inclined to indulge young people’s desire to languish in an extended twilight childhood, it’s revealing that voting is the only adult responsibility for which Democrats think children are prepared. When it comes to just about any other condition of maturity, Democrats seem to think the proper course is the exact opposite.

So lowering the voting age is both reckless in its ethos to put voting power in the hands of people who are not ready for responsible citizenship, yet also is reduced to a mere palliative.

“Democracy” is expanded as liberty recedes, making democratic participation worth little more than a pat on the back.

While this may seem fine for generations raised in the milieu of the “self-esteem” movement, it’s hardly a recipe to strengthen the republic or produce better leaders.

Further lowering the voting age—which at 18 is already quite low—degrades the positives of democracy in America and turns it into the sad caricature of mob rule that the Founders feared.

Let us do more to create responsible adults and citizens rather than perpetually apply “democracy” in places where it is unwarranted.