Half of Young Americans Want to Live in a Socialist Country 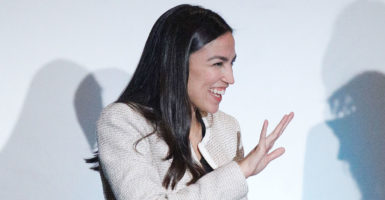 "So when millennials talk about concepts like democratic socialism, we're not talking about these kinds of 'Red Scare' boogeyman," Rep. Alexandria Ocasio-Cortez, D-N.Y., said in an interview with Business Insider in December. (Photo: Lars Niki/Stringer/Getty Images)

Half of young Americans would rather live in a socialist country, according to a new poll.

The Harris Poll found that 49.6 percent of millennials prefer living in a socialist country.

Mike Gonzalez, a senior fellow at The Heritage Foundation’s Center for Foreign Policy, told The Daily Signal in an email that the trend toward socialism is due to politically biased education.

“For several decades now we have forced-fed American students a love of government interventionism and a disdain for our founding virtues,” Gonzalez said. “Our education schools, where our teachers are trained, are especially ideological. Is it any wonder that our youngest generations have no idea about the threats of socialism, how it has failed everywhere it has been tried? They haven’t been taught that.”

However, the poll found as well that 78.9 percent of millenials and Gen X think the government should allow private insurance.

Medicare for All, a health care plan pushed by Sen. Bernie Sanders, I-Vt., that would likely eliminate private health insurance, comes with a price tag estimated at $32.6 trillion over 10 years, according to the Mercatus Center.

The poll also found that 43.1 percent of millennials and Gen Z support abolishing the Immigration and Customs Enforcement.

“The word ‘socialism’ does not carry the same stigma it did in the past, now that it has been resurrected by celebrity politicians like Bernie Sanders and Alexandria Ocasio-Cortez,” wrote Axios’ Stef W. Kight. “Young people’s political views often change as they grow older, but their support for socialistic policies is a sign that the old rules of politics are changing fast.”

Ocasio-Cortez, the freshman lawmaker from New York, is a member of the Democratic Socialists of America.

She discussed her peers’ view of socialism during an interview with Business Insider in December.

“So when millennials talk about concepts like democratic socialism, we’re not talking about these kinds of ‘Red Scare’ boogeyman,” Ocasio-Cortez said. “We’re talking about countries and systems that already exist that have already been proven to be successful in the modern world.”

The poll also found that 67.1 percent of millenials and Gen Z think that high earnings are a result of free enterprise, versus 71.2 percent of the total participants.