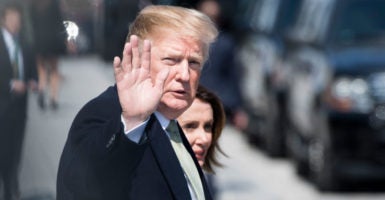 Evidence continues to mount that the U.S. Agency for Global Media is in profound need of new leadership.

Scandal after scandal has arisen from poor management. Disdain for President Donald Trump and his administration at times has led producers and reporters to engage in total unprofessionalism.

The newest outrage comes from the Voice of America’s Spanish-language website El Mundo al Dia, which on its March 5 edition went way over the line.

As the announcer promoted a story about Trump’s policy on Venezuela, the sound of a snorting pig was played in the background to accompany a photo of the president.

The VOA’s performance was worthy of “Saturday Night Live” on one of its unfunny nights. One can only wonder who the genius responsible for it was, and why no producer thought to veto it.

It was certainly not what U.S. taxpayers should expect from the government-funded media they pay for.

Regrettably, it was in no way an isolated incident at the Voice of America, where the president and first lady have been lampooned by staff before, both publicly and on the Facebook pages of employees.

The latest posting was removed from the website of El Mundo al Dia following a complaint filed by the House Foreign Relations Committee after it was exposed by a Spanish-language broadcaster.

The VOA is part of the $680 million U.S. broadcasting complex now known as the U.S. Agency for Global Media, formerly the Broadcasting Board of Governors.

Now more than two years into the Trump administration, the agency is still run by Obama-era executives, who are determined to preserve their influence and power—and it shows.

There’s simply no excuse for the inattention to improving the quality of this important foreign policy tool.

Pack’s nomination lapsed with the end of the 115th Congress under pressure from opposition from Sens. Bob Menendez, D-N.J., and Bob Corker, R-Tenn. (who has since left office). It had to be resubmitted by the administration in January.

The world stage is replete with communications-related challenges to U.S. foreign policy. The U.S. government has the tools to engage such challenges with the right leadership. Instead, it seems, the administration itself has become the target of hostile programming.