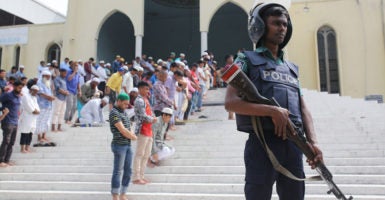 A police officer stands guard as Muslims offer Friday prayers in Dhaka, after two mosques were attacked in New Zealand, on March 15. At least one gunman killed 49 people and wounded more than 20 during Friday prayers at two New Zealand mosques in the country's worst ever mass shooting. (Photo: Rehman Asad/NurPhoto/ Getty Images

Listen to our interview with The Heritage Foundation’s Robin Simcox in the podcast, or read the lightly edited transcript below.

Kate Trinko: I’m here with Robin Simcox, the Margaret Thatcher fellow at The Heritage Foundation. Robin focuses here on research, on terrorism, and national security. Thanks for joining us today, Robin.

Robin Simcox: Great to be with you.

Trinko: All right, so the media is currently reporting that 49 at least have died in this horrible shooting in New Zealand and another 20 are injured. Does that make this one of the highest death counts for this kind of act ever?

Simcox: Well, it’s a terrible act. It’s a large body count. It’s not the highest we’ve seen in the West in recent years, but of course in terms of an attack on a mosque and certainly an attack in New Zealand where acts or terrorism are exceedingly rare, it is a very significant and of course tragic incident.

Trinko: You mentioned that for New Zealand, this is unusual. Is this a new part of the world for this kind of action? Has New Zealand ever had a shooting comparable to this?

Simcox: No, it hasn’t. The perpetrator of the attack was actually Australian as well. There was a little more of a history in Australia with terrorism but New Zealand is very quiet in comparison.

It’s an extraordinarily disturbing development. I think sometimes we associate these acts of terrorism taking place in major cities so London, or New York, or Paris, and of course there’s been a lot of attacks that have taken place in those cities, but if you look at some of the white supremacist attacks that have taken place in recent years—obviously this attack in Christchurch—we had the attack in Pittsburgh; in Charleston, South Carolina with Dylann Roof; and of course in Oslo, with Anders Breivik in 2011.

It’s been in some of the locations that you wouldn’t necessarily expect, not major population hubs. I think sometimes these white supremacist attacks can take place in somewhat unexpected destinations.

Trinko: I know the facts are still coming out, we’re recording this on Friday afternoon but from what we know now, would you say that this is an act of terrorism that occurred?

Simcox: Yeah, absolutely. The gunman uploaded his manifesto, he provided a link to it online, which makes very clear reference to Muslims being invaders, as to them being a genocide of white people. It’s very clearly a political ideological statement that he’s putting out and these acts of violence are in an attempt to kind of further his political cause, which is the definition of terrorism.

Simcox: Well, there’s been acts of violence against mosques. So in 2017, for example, there was a vehicular attack in London on the Finsbury Park mosque, which led to one person being killed.

I think the big difference here really is the scale. Obviously, 49 people killed as we speak on Friday afternoon with many more injured, and also I think the horror of it being livestreamed on Facebook is another additional component to this that we haven’t really seen too often in the past.

The footage is understandably not being shared around but this guy carried out the attack in that way because he wanted people to watch it and he wanted people to be inspired—as hard as that may be to believe—by the grotesque acts of violence, which he was perpetrating.

There’s a lot about this attack that has a unique feel to it and it’s a very dark day for New Zealand.

Trinko: Yeah. It’s so chilling to think that that footage exists. In New York, Mayor Bill de Blasio tweeted, “While there is no specific or credible threat at this time, we are increasing our NYPD presence at mosques throughout the city out of an abundance of caution.” Do Muslims around the world have reason for concern now that there could be copycat attacks or further attacks as part of this?

Simcox: I think it’s understandable there is a level of precaution today of course, because there is that fear, as I mentioned, that this kind of attack will inspire copycats. Obviously, terrorism generally is an extraordinarily rare occurrence, thankfully. It seems to be getting more common these days than it used to be but it is still rare. There isn’t widespread hatred or fear of Muslims, I don’t believe that is the case in the West at all.

Of course, we have to be mindful and as the attack in New Zealand showed, there are these people who have a very sick, and evil, and twisted ideology where they view regular Muslims as their enemy, as people who have come to the West to eliminate the white race and to act accordingly with these dreadful acts of violence.

I think it’s understandable that in the wake of this attack, they’ve ramped up security around mosques. The threat level in New Zealand has been raised—all understandable responses but I still don’t believe that this is going to be, we must hope this isn’t the harbinger of something more frequent.

Trinko: OK, so as I said earlier, we’re still finding out a lot of the facts. However, The Wall Street Journal and other outlets are reporting that there appears to be reason to believe that the alleged shooter was motivated by white supremacist views. You mentioned briefly that we have seen some attacks along these lines before, does this sort of follow the usual pattern? Is it new? Do we need to be more concerned about white supremacy in light of these attacks?

Simcox: Well, there is something a little different about it. White supremacist attacks certainly is not a new phenomenon. There’s been an unfortunate amount of them in recent years especially.

I think what was slightly different about this is that he, more than any other extreme right-wing terrorists that I can remember, seems to be entirely immersed in this quite weird, twisted, dark corner of internet culture where his manifesto, along with the usual references to various kind of like white supremacist iconography, also refers to various memes to quite obscure references to kind of like internet culture that he is exposed to through 4chan, these kind of image posting boards where you can post anonymously.

The manifesto is also sarcastic at times or self-knowing. He refers to individuals as inspirations behind his attack who very clearly aren’t. It’s facetious almost at times, his manifesto, which is unusual but also a sign that the language makes sense in the context of the internet culture in which he’s operating, but it’s not a language that we’re terribly familiar with outside that specific kind of strange part of internet culture.

Trinko: Does it surprise you that this attack was carried out with guns? Over the years we’ve seen vehicle attacks, we’ve seen obviously planes in the case of 9/11, and of course some by guns.

Simcox: I think that the kind of attack that was being planned, firearms does make sense because he obviously wanted to, he wanted to livestream it so he wanted all the people that clicked on the Facebook link that he had attached to his post online, enabled people to watch him as he carried out this terrorist attack.

It’s almost like with the way it’s filmed, you’re watching a video game. To kind of create the impact he wanted, I’m not surprised that he chose firearms as opposed to knives or a vehicle or something like that because it gives that effect of it being like you’re watching someone in “Call of Duty” or one of these other PlayStation games. It also makes the video feel unreal in some ways but the use of firearms I think makes sense, not only for the lethality of the weapon, but also the way it enabled people to watch this attack take place.

Trinko: OK. Well, thank you for joining us, Robin.