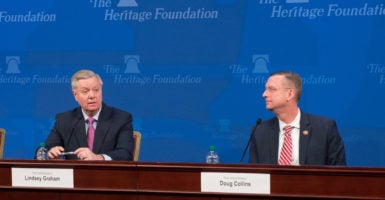 Sen. Lindsey Graham, R-S.C., chairman of the Senate Judiciary Committee, says he is committed to processing judges in the 116th Congress as well as working for a “broader package” on immigration at an event at The Heritage Foundation as Rep. Doug Collins, R-Ga., looks on. (Photo: Erin Granzow for The Heritage Foundation)

Republican Sen. Lindsey Graham, chairman of the Senate Judiciary Committee, says he is committed to processing judges in the 116th Congress, as well as working to reform immigration and forcing a vote on late-term abortion.

“So I’m committed to processing as many highly qualified conservative judges at the district, circuit level as possible,” Graham said Thursday at an event at The Heritage Foundation titled “Republican Judiciary Committee Priorities for the 116th Congress.”

“We’re off to a very good start,” the South Carolina senator added.

He said the Democrats using the nuclear option in 2013 and departing with precedent to confirm judicial nominees with 51 votes instead of 60 has changed the way the Senate does business.

“I work with Democrats, try to accommodate their needs where I can—bottom line is they changed the rules with circuit court [nominees] back in 2013,” Graham said.

Graham also called for a “broader package” on immigration.

“If you get to America as a family, you bring a child, you are never going to leave,” Graham said. “Two percent of the unaccompanied children wind up going back to their home country. If we don’t change these things then you can build walls to the sky—[it’s] not going to work.”

“So we’ve got to change the law. That means probably negotiating a little broader package.”

The South Carolina lawmaker said he believes that illegal immigration would stop if America enforced its immigration law.

“If word ever got out that if you get here, you’re going right back, they would stop,” Graham said. “Having said that, you need a barrier.”

“Human trafficking experts said if you had real barriers the chance of smuggling children into the country for sexual exploitation goes way down,” Graham said. “So we’ll be working on that.”

The Senate voted 59-41 Thursday to reject President Donald Trump’s emergency declaration he announced on Feb. 15 in order to unlock funding for his promised barrier along the U.S.-Mexico border. Trump hinted that he would veto the Senate’s rejection.

Graham also said he thinks the Senate should take a vote on late-term abortion.

“We’re one of seven countries that allow abortion on demand in the fifth month, 20 weeks,” Graham said. I want to have a hearing and a vote. I want to get out of the club. You’re in it with North Korea and Iran—very seldom is it good to be in a club with them about anything.”

Rep. Doug Collins, R-Ga., the ranking member on the House Judiciary Committee who joined Graham at the Heritage event, said one of his goals is to continue to build on the success of criminal justice reform in the First Step Act, which Trump signed into law in December.

“I believe that the conservative message is absolutely the best message for people but not only from a financial standpoint but also from a moral and what is right standpoint, Collins said of criminal justice reform, adding that he wants the House to “continue looking at reasonable ways to deal with sentencing reforms and also the mandatory minimum issue that we have in this country.”