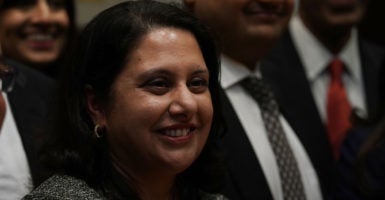 Neomi Rao's nomination to the U.S. Court of Appeals for the D.C. Circuit was approved by the Senate on Wednesday on a straight party-line vote. (Photo: Alex Wong/Getty Images)

President Donald Trump’s nominee to fill the vacancy on the U.S. Court of Appeals for the D.C. Circuit left by now-Supreme Court Justice Brett Kavanaugh was confirmed by the Senate on Wednesday 53-46.

The vote to confirm Neomi Rao to the appellate court was entirely along party lines, with Sen. Patty Murray, D-Wash., not voting.

“I just voted to confirm Neomi Rao to the D.C. Circuit Court,” Sen. Marsha Blackburn, R-Tenn., tweeted after casting her vote. “In my visits with Ms. Rao, I was impressed by her expertise, preparation, and diligence.”

Rao, 45, is an Indian-American who previously served as the administrator of the Office of Information and Regulatory Affairs, an office within the Office of Management and Budget focused on regulatory review.

She also formerly taught structural constitutional law, administrative law, and legislation and statutory interpretation at the Antonin Scalia Law School at George Mason University and is a former intern at The Heritage Foundation.

Rao came under fire from liberal activists seeking to derail her nomination to the court by attacking pieces she wrote in college that criticized irresponsible drinking and calling race a “hot, money-making issue,” as The Daily Signal previously reported.

“Rao’s experience and intellect make her uniquely qualified to fill Justice Kavanaugh’s shoes on the D.C. Circuit Court of Appeals,” Severino said. “Rao will fairly apply the law and honor the Constitution; she’ll be a phenomenal judge serving on one of our nation’s highest courts.”

Many Democrats were vocal in their opposition of Rao, among them Sen. Patrick Leahy, D-Vt., who tweeted Wednesday that she “was nominated by Pres. Trump for ONE REASON: her lifelong mission to ‘get rid of regulation.’ Even if it means polluting our clean air, denying access to healthcare, & undermining victims’ rights.”

“America has the best, most independent, judicial system in the world, and we need the right kind of judges to keep it that way,” Kay Coles James, president of The Heritage Foundation, said in a statement Wednesday. “America needs judges who know their proper role and will not bend to public or political pressure. Neomi Rao is well-qualified to serve on any federal court—even the American Bar Association says so—but especially for the U.S. Court of Appeals in Washington.”