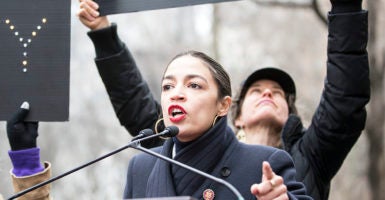 Do you pay enough taxes? What is enough?

Suddenly, 70 percent tax rates are a progressive plan, although Rep. Ilhan Omar, D-Minn., added, “We’ve had it as high as 90 percent.”

That was the top tax rate when I was a kid, and today, many Democrats say if we’d just raise rates on rich people, government would have plenty of money to pay for our wonderful programs.

What progressives don’t say, perhaps because they don’t know it, is what economic historian Dr. Phillip Magness explains in my new video: “No one actually paid anywhere close to those rates.”

For more than a decade, Magness has researched old taxes.

Then, because of that, and because the high tax rates discouraged work, President John Kennedy backed a bill that lowered the top rate to 70 percent.

But it turned out that the 70 percent rate wasn’t very real either.

“A millionaire on average would pay 41 percent,” says Magness, because of “all these deductions and exemptions and carve-outs that are intentionally baked into the tax code.”

If you look at newspapers of that time, you see ads promoting things like free $2,499 ocean cruises.

“[B]asically take a vacation around the Caribbean,” explains Magness, “but while you’re onboard the ship you attend, say, an investing seminar or a real estate seminar, and then write off the trip.”

Some rich people bought musical instruments for their kids and deducted the cost because, say, a clarinet would supposedly provide “therapeutic treatment.”

Instead of investing in ideas that might create real wealth, rich people hired accountants to study the tax code.

“Who can afford the best accountants? It’s always the wealthy,” says Magness.

Today, our top tax rate is 37 percent. A dozen years after Kennedy’s tax cuts, Ronald Reagan proposed reducing the 70 percent rate, saying, “Our tax system could only be described as un-American.”

“Democrats actually agree with him,” recounts Magness. “Reagan goes to the table and says, ‘Let’s make a deal … cut the rates … and in exchange, we’ll consolidate the tax code.”

Surprise—the lower rates brought in just as much money.

It turns out that tax revenue as a percentage of gross domestic product stays about the same no matter what the top bracket is. Higher tax rates don’t necessarily get rich people to pay more taxes.

President Donald Trump, who in some years paid zero income tax, understands that. Before he became president, I asked him about a proposed tax hike.

That happened in Europe, recounts Magness: “France attempted a massive tax on its wealthiest earners. … the business people left in a mass exodus from the country.”

But today’s progressives are selective when they look at history. On TV, Ocasio-Cortez said, “Under Republican administration … Dwight Eisenhower, we had 90 percent marginal tax rate.”

I asked Magness what would happen if the U.S. were to return to those rates—while also eliminating the deductions that came with them.

“You’re asking for an economic disaster,” he answered. “I ask the question: Do we leave [wealth] in the private sector where the market decides? Or do we subject it to corrupt politicians?”

Please, let’s leave most of America’s wealth in private hands.