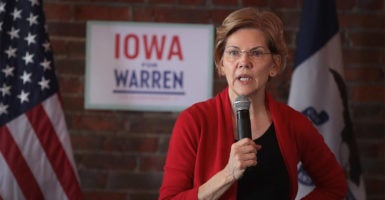 "The rich and powerful are taking so much for themselves and leaving so little for everyone else," says Sen. Elizabeth Warren, D-Mass. (Photo: Scott Olson/Getty Images)

Some Americans have much higher income and wealth than others.

Former President Barack Obama explained, “I do think at a certain point you’ve made enough money.”

An adviser to Rep. Alexandria Ocasio-Cortez, D-N.Y., who has a Twitter account called “Every Billionaire Is A Policy Failure,” tweeted, “My goal for this year is to get a moderator to ask ‘Is it morally appropriate for anyone to be a billionaire?'”

Democratic presidential hopeful Sen. Elizabeth Warren, D-Mass., in calling for a wealth tax, complained, “The rich and powerful are taking so much for themselves and leaving so little for everyone else.”

These people would have an argument if there were piles of money on the ground called income, with billionaires and millionaires surreptitiously getting to those piles first and taking their unfair shares. In that case, corrective public policy would require a redistribution of the income, wherein the ill-gotten gains of the few would be taken and returned to their rightful owners.

The same could be said if there were a dealer of dollars who—because of his being a racist, sexist, multinationalist, and maybe a Republican—didn’t deal the dollars fairly. If he dealt millions to some and mere crumbs to others, decent public policy would demand a re-dealing of the dollars, or what some call income redistribution.

Here’s an example: I mow your lawn, and you pay me $40. Then I go to my grocer and demand two six-packs of beer and 3 pounds of steak. In effect, the grocer says, “Williams, you are asking your fellow man to serve you by giving you beer and steak. What did you do to serve your fellow man?” My response is, “I mowed his lawn.” The grocer says, “Prove it.” That’s when I produce the $40. We can think of the, say, two $20 bills as certificates of performance—proof that I served my fellow man.

A system that requires that one serve his fellow man to have a claim on what he produces is far more moral than a system without such a requirement.

Let’s look at a few multibillionaires to see whether they have served their fellow man well.

Bill Gates, co-founder of Microsoft, with a net worth over $90 billion, is the second-richest person in the world. He didn’t acquire that wealth through violence. Millions of people around the world voluntarily plucked down money to buy Microsoft products.

That explains the great wealth of people such as Gates. They discovered what their fellow man wanted and didn’t have, and they found out ways to effectively produce it. Their fellow man voluntarily gave them dollars.

If Gates and others had followed Obama’s advice that “at a certain point” they’d “made enough money” and shut down their companies when they had earned their first billion or two, mankind wouldn’t have most of the technological development we enjoy today.

Take a look at the website Billionaire Mailing List’s list of current billionaires. On it, you will find people who have made great contributions to society.

Way down on the list is Gordon Earle Moore—co-founder of Intel. He has a net worth of $6 billion. In 1968, Moore developed and marketed the integrated circuit, or microchip, which is responsible for thousands of today’s innovations, such as MRIs, advances in satellite technology, and your desktop computer.

Though Moore has benefited immensely from his development and marketing of the microchip, his benefit pales in comparison with how our nation and the world have benefited in terms of lives improved and saved by the host of technological innovations made possible by the microchip.

The only people who benefit from class warfare are politicians and the elite; they get our money and control our lives.

Plus, we just might ask ourselves: Where is a society headed that holds its most productive members up to ridicule and scorn and makes mascots out of its least productive and most parasitic members?