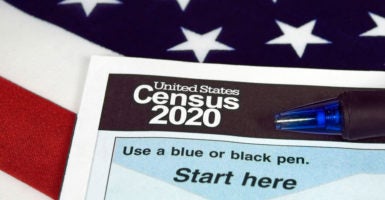 The chairman of the House Oversight and Reform Committee wants Commerce Secretary Wilbur Ross to testify about "preparations for the census” and “the addition of a citizenship question.” (Photo: Getty Images)

Commerce Secretary Wilbur Ross is scheduled to testify Thursday before the House Oversight and Reform Committee in a hearing on the Trump administration’s reinstating a standard citizenship question on the U.S. census.

But with civil litigation over that very issue now before the Supreme Court, the House committee should cancel the hearing in recognition of the fact that having Ross testify is inappropriate and could, as the Justice Department has recognized in the past, jeopardize the government’s litigation.

The Supreme Court is scheduled to hear oral arguments April 23 in Department of Commerce v. New York, in which the state of New York challenged the addition of the citizenship question to the 2020 census form.

The case presents two issues. First, whether a lower district court erred when it enjoined Ross, as secretary of the Department of Commerce, from reinstating the citizenship question. Second, whether the district court could compel the testimony of Ross to, as the government’s brief says, “probe the mental processes of the agency decision-maker” outside of the administrative record in the case.

Rep. Elijah Cummings, D-Md., chairman of the Oversight and Reform Committee, says in a press release that Ross will testify about the “ongoing preparations for the census” and “the addition of a citizenship question.”

No one questions the fact that Congress has oversight authority over the executive branch. As the Justice Department said in a letter dated Jan. 27, 2000, oversight is “an important underpinning of the legislative process.”

Oversight provides Congress with information necessary to “rectify practical problems in current law or to address problems not covered by current law,” the agency wrote to then-Rep. John Linder, who was chairman of a House subcommittee on rules and organization.

However, as Justice said in the letter, while its goal is to “satisfy legitimate legislative interests,” it also must protect the executive branch’s “confidentiality interests.” Examples of confidential information include “information the disclosure of which might compromise open … civil cases.”

Congressional inquiries “during the pendency of a matter,” Justice wrote, “pose an inherent threat to the integrity of the Department’s law enforcement and litigation functions.”

Although such confidentiality considerations are particularly important in criminal matters, the Justice Department (and thus the executive branch) have “similar interests in the confidentiality of internal documents relating to its representation of the United States in civil ligation.”

Such files, it said:

[C]ontain confidential correspondence with client agencies as well as the work product of our attorneys in suits that frequently seek millions of tax dollars. They also contain ‘road maps’ of our litigation plans and preparations, as well as confidential reports from experts and consultants. Those plans could be seriously jeopardized and our positions in litigation compromised if we are obliged to disclose our internal deliberations including, but not limited to, our assessments of the strengths and weaknesses of evidence or the law, before they are presented in court. That may result in an unfair advantage to those who seek public funds and deprive the taxpayers of confidential representation enjoyed by other litigants.

Moreover, according to Justice’s 2000 letter, such congressional inquiries about ongoing litigation matters—such as Department of Commerce v. New York—“inescapably create the risk that the public and the courts will perceive undue political and Congressional influence over law enforcement and litigation decisions.”

The Justice Department argues in its brief filed with the Supreme Court that Ross acted fully within his authority under federal law, 13 U.S.C. §141(a), to determine the “form and content” of the census and to “obtain such other census information as necessary.”

The department also points out that the high court previously stayed an order from the district court compelling Ross’ testimony.

Requiring Ross to answer questions from lawmakers about reinstating the citizenship question on the census potentially would reveal confidential information, as outlined in Justice’s 2000 letter to Linder in the midst of an open case. It also would be obtaining testimony from the commerce secretary when the legitimacy of a lower court order compelling his testimony is a subject of contentious debate before the Supreme Court.

While the Supreme Court hasn’t issued a final decision on the latter issue, it temporarily has stopped that lower court order from going into effect until it resolves the case. Forcing Ross to testify before the House committee would be an end run around the Supreme Court.

Under these circumstances, it is inappropriate for Ross to appear before the committee to answer questions. If the commerce secretary appears at all, no one should be surprised if the Justice Department advises him to refuse to answer any questions relevant to the issues being fought over in the courts.

As the Justice Department recognizes, “the process of Congressional oversight is an important part of our system of government.” Executive branch agencies such as the Justice and Commerce Departments should cooperate with Congress when it is properly engaged in oversight.

But there are exceptions to that, including when Congress potentially is interfering with the executive branch’s defense of its actions and policies in civil litigation. The Justice Department has an obligation to maintain the confidentiality of the internal deliberations, communications, and decisions of an agency that has been sued when Justice is defending that agency.

Once this case is over, and the Supreme Court has rendered a decision, congressional oversight may be appropriate to the extent it is needed for legislative purposes.

But now, with litigation in full swing and oral arguments only a month away, is not the time.