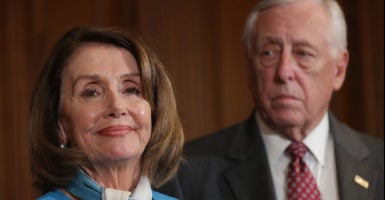 House Republicans’ use of a century-old legislative procedure that helps the minority party alter or oppose measures advanced by the majority has exposed significant divisions among Democrats.

Now some House Democrats want to do away with the procedure, called a motion to recommit. It allows a lawmaker in the minority to move that a bill be sent back to a committee for a particular reason.

In a letter to Pelosi and three other Democrat leaders, 17 freshman Democrats ask them to “end abuse of the MTR,” referring to the motion to recommit.

The two freshmen, Reps. Chrissy Houlahan of Pennsylvania and Lori Trahan of Massachusetts, originally suggested in a draft of the letter that Pelosi and leadership do away entirely with the motion to recommit before a House vote, expected this week, on election legislation.

Conservatives say that bill would inhibit states’ powers to set qualifications for voters, remove safeguards on voter registration rolls, and undermine the integrity of elections.

“I think you should just vote against all motions to recommit,” House Speaker Nancy Pelosi, D-Calif., told reporters last week. “It’s a procedural vote, it’s a ‘gotcha’ on the part of the opposition. Let’s make life easy: Just vote against them.”

But even one of Pelosi’s top deputies, House Majority Whip Jim Clyburn, D-S.C., says the procedure helps lawmakers to vote their conscience.

“My position has always been if it does no harm, and members feel that’s a vote they need to cast, then it’s fine with me,” Clyburn told Politico.

How Republicans Wield the Procedure

The amendment, which some centrist Democrats supported, would require that illegal immigrants who undergo a background check in a firearms purchase be reported to U.S. Immigration and Customs Enforcement.

House Republicans also successfully used the tool to push Democrats to include language condemning anti-Semitism in an unrelated bill.

By attempting to employ the motion about two dozen times, Republicans are revealing significant policy divisions among Democrats, including more moderate first-term lawmakers.

“Clearly they are doing this as a ploy and not because [they] actually give a s— about the issue,” Rep. Katie Hill, D-Calif., one of the freshmen, told Politico.

Democrats, especially some liberal freshman, are divided over Republicans’ use of the motion to recommit to put their mark on the majority’s legislation.

“It absolutely hurts the party,” Rep. Alexandria Ocasio-Cortez, D-N.Y., said, referring to Democrats and their need to stick together.

“And I do think that for anyone who anticipates voting ‘no,’ or defecting on the MTR [motion to recommit], you know, that’s why we whip,” Ocasio-Cortez said, according to The Hill. “And that’s why we have to go into that chamber knowing exactly what we’re doing and not figuring it out while we’re on the floor.”

In the final version, Houlahan, Trahan, and 15 other freshman Democrats call the motion to recommit  “a weapon to vandalize the legislative process rather than enhance it.”

But a 2012 report by the Congressional Research Service says the procedure is a way for the House’s minority party, whether Republican or Democrat, to voice concerns about legislation.

A lawmaker in the minority party, the report says, may move that legislation be referred back to a committee, usually the one that originally reported the bill to the House floor for consideration.

A total of 60 Democrats began their first term in January, 17 of whom signed the letter to Pelosi seeking to defuse Republicans’ use of the procedure.

Some Democrats want to ban using the motion to recommit because Republicans have used it to their advantage since becoming the minority party in January, Rep. Mike Johnson, R-La., chairman of the largest GOP caucus, told The Daily Signal in an interview Thursday.

“We’ve been so successful with the motion to recommit that the word from the House floor today was that the Democrats are going to change the rule and take that little procedural maneuver out of the playbook, which would be unprecedented in the history of the Congress,” Johnson said.

During a press conference Thursday, House Minority Leader Kevin McCarthy, R-Calif., noted that the procedure targeted by Democrats dates back to 1909.

McCarthy said the motion to recommit “was created with the stated purpose of giving the minority the right to have a vote upon its position upon great public questions.”

Democrats’ effort to end the practice is an attack on free speech, McCarthy said:

What’s so unfortunate is that Democrats are now thinking about changing the rule. Rather than reconcile the differences within their party that are driving this division, Democrats want to rig the rules and suppress the minority party’s speech on the House floor.

The motion to recommit also gives a lawmaker in the minority party the ability to request that a bill be referred back to the conference committee, usually comprised of House and Senate members tasked with fixing differences over legislation passed out of both chambers.

In the letter, Houlahan, Trahan, and the 15 others describe themselves as “new members of Congress from diverse backgrounds and with distinct points of view.”

They say they are asking Pelosi and her leadership team to “take further steps to make the proceedings of the House of Representatives more accessible and transparent to the American people.”

“We are aware that, year after year, both parties have deployed the MTR [motion to recommit] in bad faith and with little transparency,” the letter reads, adding:

During our first two months, we have personally seen it used to poison debate and undermine legislation, as well as to create fodder for partisan political attacks.

Whatever our predecessors’ original vision for the MTR may have been, in this era it is a weapon to vandalize the legislative process rather than enhance it. …

It is essential that Congress fix the current process. We must act without delay. We urge you to create a more transparent process that allows for robust debate and serious, bipartisan efforts to improve legislation, and we stand ready to work with you and with our colleagues to improve this process and end abuse of the MTR.

Johnson is chairman of the House’s Republican Study Committee, which includes at least six task forces devoted to policy and procedure. One is focused on protecting standard procedure and finding ways to improve it, the Louisiana Republican told The Daily Signal.

“Look, we’re in unprecedented times. We recognize that in every way. On the policy, on the substance of it, on a procedure,” Johnson said, adding:

We’re going to use every tool that’s available to us, and we’ve got some really smart men and women on our team. One of our task forces in the Republican Study Committee is dedicated to floor strategy, as the RSC action group. And we are the ones cooking up some of these good ideas.

Tommy Binion, vice president of congressional and executive branch relations at The Heritage Foundation, said House Democrats’ push to end use of the motion to recommit is purely political.

“The motion to recommit guarantees a certain level of protection for the minority party,” Binion said in an email to The Daily Signal.

“It’s virtually the only procedural feature of the House of Representatives to do that, and has held that role for nearly a century,” Binion said. “Therefore, it has been consistently honored by both parties. The suggestion that the current Democratic majority would eliminate this protection is troubling, because the practice of hearing from the minority party is an important step in the legislative process.”

Binion said the motion to recommit has helped conservatives to improve legislation they can’t stop, and is a useful tool to regulate the balance of power.

“Republicans this year have successfully amended, and improved, legislation twice by using the MTR to offer policies that necessarily have the support of the House,” he said, referring to the gun bill and the anti-Semitism measure.

“Why would we not want that to continue? A rules change to end this key practice will inevitably be seen as partisan and cynical.”