Congress Should Keep Its Promise to End Energy Subsidies 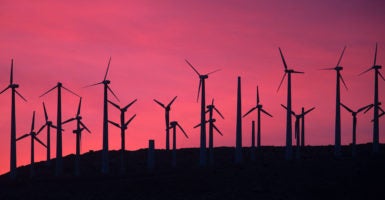 As Americans work to file their taxes, Congress is setting to work on a package of expired tax credits this spring to enrich a few energy technologies at the expense of federal taxpayers.

Sens. Charles Grassley, R-Iowa, and Ron Wyden, D-Ore., of the Senate Finance Committee last week introduced a bill that would retroactively renew 26 tax credits that expired at the start of 2018.

The Grassley-Wyden bill would carry those tax credits through 2019 even though they were intentionally left out of the Tax Cuts and Jobs Act and past omnibus spending deals.

Called the Tax Extender and Disaster Relief Act of 2019, the legislation carves out favors for a few odds and ends such as race horses, motor sports complexes, and medical expenses.

But most of the bill gives special breaks to energy companies that produce biofuels, electric and fuel cell vehicles, and certain boutique renewable energy technologies, including biomass and geothermal.

In short, they’re nothing more than subsidies doled out through the tax code. Not only is this fiscally irresponsible, but Congress also does no service to these energy technologies and companies in the long run by subsidizing them.

It’s bad enough that several years of lobbying by these special interests appears to be working. Rather than getting closer to a free energy sector, that’s unfortunately business as usual for Washington.

But it’s another thing altogether to see some in Congress all too willing to hand out subsidies apparently unsolicited by lobbyists. How efficient.

As reported by E&E News, some Democrats on the Senate Finance Committee are angling to add wind and solar tax credits to a larger tax extenders package like the one introduced by Grassley and Wyden.

On these, Republicans and Democrats reached a compromise in the 2015 omnibus spending bill to extend credits one more time and put them on a schedule to sunset in 2022, a decision that diverted over $14 billion to the green energy industry. From the beginning, these credits (like those in the Grassley-Wyden bill) were designed to be temporary but have expired, been extended, re-extended, and retroactively extended for decades.

Finally, it seemed that Washington had had enough, and the wind and solar industries could no longer claim they were infant industries in the face of falling costs and industry growth.

And the solar industry said of the solar investment tax credit: “We have not asked for an extension of the ITC.”

And yet now, that compromise could mean nothing if Democrats have their way.

There is some hope of responsible action winning out. Grassley, historically a champion of wind subsidies, said: “We made that decision in 2015. I think it would be wrong for me to go back on my word.”

But one has to ask: What will it take to get the rest of Congress to keep a promise?