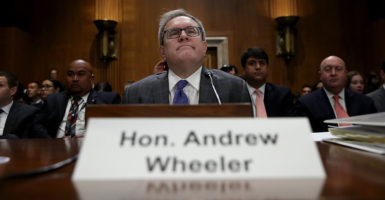 Andrew Wheeler was confirmed by the Senate last week as administrator of the Environmental Protection Agency. Wheeler previously served as deputy administrator before stepping into the role of acting administrator in July 2018. He visited the Conservative Political Action Conference last week and spoke to The Daily Signal. A lightly edited transcript is below.

Rob Bluey: Although you were just confirmed by the Senate, you’ve been in the job as acting EPA administrator for several months. Can you share what it’s been like to have that experience to work in the Trump administration?

Andrew Wheeler: It’s been great. You know, I started my career as an employee at EPA in 1991 during the first Bush administration. It’s great to be back. When President Trump called me and asked me to take over at EPA, he said, “Continue to clean up the air. Continue to clean up the water, and continue to deregulate in order to create more jobs for the American public.” We can do all three. The president knows we can do all three, and I think we’re proving it.

Bluey: You’ve had success in all three of those areas. What would you say over the past several months stands out in your mind as one of your biggest accomplishments?

Wheeler: We just released our new Waters of the United States regulations with the Federal Register. This is something that the administration has been going back and forth with. There have been three Supreme Court cases. The Obama regulation was stayed by a number of different courts.

We did this with a very unique approach: One, we put it out there, and we said we’re distinguishing between what is a federal waterway and what is a state waterway. Second, and this is the overarching theme of the whole regulation, is that a property owner should be able to stand on his or her property and be able to tell for themselves whether or not they have federal waters without having to hire an outside attorney or a consultant. That’s really important to provide that certainty to the American public.

Bluey: Can you explain what exactly a water of the United States is, because as you just described, in many cases, it’s unclear for property owners.

We have a whole list. For the first time, we are defining what is a water, and we’re also defining, just as important, what is not a waterway. For example, if something retains water just because of rain, that’s not a water of the United States anymore.

Farm ditches will no longer be considered a water of the U.S. That might surprise people, but both of those have been declared wetlands or waterways in the past. So we are defining what is in, and also, just as importantly, what’s out.

Bluey: As you craft the rules and regulations at your agency, one of the important things is getting feedback from the American people. I know it’s been a priority under the Trump administration to get out of Washington and hear from Americans. Tell us about the experiences that you’ve had and some of the places you’ve been able to go.

Wheeler: It’s been great. When we announced the Waters of the U.S., we did have an announcement in Washington, D.C., but the very next day I got on a plane with Secretary of Agriculture Sonny Perdue and we went to Tennessee. We had a meeting with farmers from three different states. And to hear the feedback from those farmers was very important.

It’s important for me to hear what people think about what we’re doing and what their problems are, so we can better respond and be more responsive to the American public.

Bluey: One of the things that Vice President Mike Pence touted at CPAC is the success that the Trump administration has had when it comes to regulations and reducing the red tape. What does that mean in terms of the constituencies you deal with?

Wheeler: One of the things that I’m trying to talk about more is energy production. President Trump wants us to be energy dominant. And we are. We are energy dominant. But along with that, we produce our fossil fuels here in the United States in a much more environmentally conscious manner than fossil fuels produced anywhere else in the world.

If you’re Europe, and you want to buy natural gas, you can buy it from Russia or you can buy it from the United States. Our natural gas is more environmentally conscious, more environmentally friendly the way we produce it because of our regulations here. Same with our coal. Same with our oil. That’s really important for the American public to understand as well.

Bluey: EPA adopted a lean management approach that has been important in terms of improving the time that it takes to get permits done and some of the day-to-day functions at the agency. How’s it going under your watch?

Wheeler: It’s going really well. The lean management’s also known as the Toyota system. We’re using it to address our longstanding systems in the EPA. For example, how long it takes us to process a permit. When we came in, President Trump said, “I want to do all federal permits within two years.” And we took a look at the EPA, and we said, “How long is it taking you to process permits?” And they weren’t tracking it.

Bluey: Looking ahead, what are some of the things that you hope to accomplish over the next several months?

Wheeler: We certainly want to move forward and finalize some of the regulations we have out there. The Waters of the U.S. [rule] that I mentioned, we put it out for public comment. I encourage people to please comment on it. You can find it in the Federal Register. Take a look at it. Let us know whether you like it or don’t like it, what room for improvement.

Bluey: Administrator Wheeler, thanks for joining The Daily Signal.

Wheeler: Thank you very much.