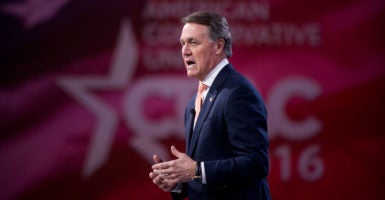 “The Obama administration … by the way, that was eight years [of] the lowest economic growth in U.S. history,” Perdue said.

He said that all Americans, not just some, are seeing the benefits of the Trump economy, especially since the president signed Republican lawmakers’ tax cuts into law on Dec. 22, 2017.

“We’ve got … the lowest unemployment in 50 years, [and the] lowest African-American, Asian, and Hispanic unemployment ever,” Perdue said. “So this is moving in the right direction.”

Perdue spoke during a discussion of the national debt moderated by Tim Chapman, executive director of Heritage Action for America, the lobbying arm of The Heritage Foundation.

Perdue also touted the success of Republicans’ tax reform package, which Adam Michel, an analyst on tax policy and the federal budget at The Heritage Foundation, says has allowed a typical family of four to get a $2,917 tax cut this year.

“What we found is, if [we] do the right things and what we believe, we can get good results,” Perdue, former CEO of Dollar General, said. “We passed the historic tax bill …  and last year alone, a trillion dollars of our [corporate] inversion gross profits came back into the economy. So collectively, we’ve freed up about $6 trillion to go back into this economy.”

Perdue charged the CPAC crowd to keep their lawmakers honest.

“I believe that we, you and I, can have an impact on this town, but we have got to maintain accountability of the people that we put in office,” he said.

Thus report has been modified to include Tim Chapman’s role.