What a Judge’s Ruling on Drafting Women Means for Military 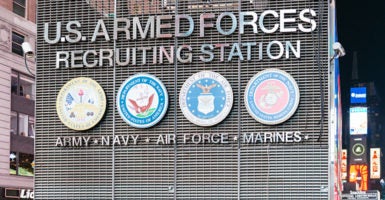 "The judge did not go so far as to require the government to require women to sign up for the draft," The Heritage Foundation's Charles Stimson told The Daily Signal. Pictured: A recruiting station for the U.S armed forces in Times Square in New York City. (Photo: Roberto Machado Noa/LightRocket/Getty Images)

A federal judge’s ruling that women must be included in a potential military draft is based on incomplete information, an advocate for military readiness says.

The Marines’ study, which covered 2012 to 2015, also showed that in infantry training, women were injured at a rate six times higher than men, with 13 percent hurt compared with 2 percent.

Congress never considered theMarines’ findings in hearings, and didn’t make them part of the public record, Donnelly told The Daily Signal. This inhibited the Justice Department’s ability to argue the case, she said.

The National Coalition for Men, a San Diego-based group that says it raises awareness about sexual discrimination against men, sued the federal government to require women to sign up with the Selective Service, just as men do.

U.S. District Judge Gray Miller of the Southern District of Texas made the ruling Friday. In it, Miller wrote:

The average woman could conceivably be better suited physically for some of today’s combat positions than the average man, depending on which skills the position required. Combat roles no longer uniformly require sheer size or muscle.

The Obama administration, under Defense Secretary Ash Carter, determined in 2015 that women should be in combat just as men are.

President George W. Bush appointed Miller. It’s more likely that Miller made his decision without all the relevant information than that he ruled as an activist judge, Donnelly said.

“That’s what judges do,” she told The Daily Signal. “The merits of the case really were not heard.”

Donnelly called Miller’s ruling “far reaching,” even though at this point it is a declaratory judgment, one that does not impose an injunction on the military. However, it may be appealed.

A military draft hasn’t been in effect in the U.S. since the early 1970s, at the end of the Vietnam War.

Military service is voluntary for both men and women. Still, all males are required to register with the Selective Service after their 18th birthday or risk losing student loans, access to government jobs, and other benefits. Women do not face the same requirement—at least until the matter is fully adjudicated.

If the Selective Service were to change its policy, all men and women would have to register for a military draft upon turning 18.

In the event of a draft during a war or national crisis, the person with the next number drawn would be drafted into the military regardless of gender.

Such a policy poses national security risks, Donnelly said. Congress failed, she said, by not holding hearings on women in combat to highlight the Marine Corps data.

“If you have to call in everybody 50/50, it hurts readiness and does not improve security,” Donnelly said. “Congress is not considering national security. They are looking at the military as another equal opportunity employer.”

Miller’s ruling recognized a distinction since the Defense Department lifted the ban on women in combat, another military expert said.

“The judge noted that in 2015, the Defense Department made all service roles available to women,” Charles Stimson, a senior legal fellow for national security law at The Heritage Foundation, told The Daily Signal. “The judge reasoned that since the 1981 Supreme Court case relied in large part on the fact that combat roles were not open to women, and now women are eligible for all roles within the military, the case was distinguishable.”

The judge did not go so far as to require the government to require women to sign up for the draft. Instead, the ruling by the judge is a declaratory judgment, which only affects the two men who claimed that their rights were violated because they, and not women, were required to register for the draft.

But the case has broader significance, and will likely be appealed, as it is highly likely that other men will make similar challenges.

“Women are now allowed in combat, so this decision is long overdue,” Marc Angelucci, a lawyer for the National Coalition for Men, said in a prepared statement, adding:

After decades of sex discrimination against men in the Selective Service, the courts have finally found it unconstitutional to force only men to register. Even without a draft, men still face prison, fines, and denial of federal loans for not registering or for not updating the government of their whereabouts. Since women will be required to register with the Selective Service, they should face the same repercussions as men for any noncompliance.

The matter should be decided by Congress, not the courts, Harvard law professor Noah Feldman wrote in a Bloomberg News opinion column.

“The court’s decision only makes sense if women would be obligated to serve in combat,” Feldman wrote. “Yet the district judge didn’t expressly say he was ordering the military to obligate women to serve. This is probably enough reason for a court of appeals to reverse the decision if it wants to do so.”

Seen from the standpoint of 1970s legal feminism, the judge’s decision looks like a win. The case was brought by male plaintiffs, the strategy that [Ruth Bader] Ginsburg often followed in the 1970s to convince the Supreme Court to strike down laws based on sex stereotypes. As we now know, it is a stereotype to say women can’t serve in combat. Of course women can fight.

Yet there remains the question of whether women should be obligated to take combat roles. Some feminists would no doubt say yes. Others might say that true equality would allow women to make that choice for themselves, shaping gender roles as they see fit. It isn’t obvious that being required to fight in wars you may not like expands your equality—or your freedom.