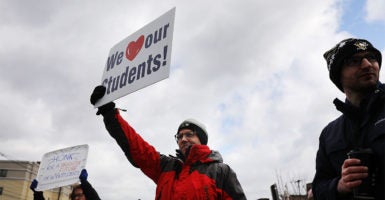 West Virginia teachers are tasting victory after a two-day strike, putting to rest state legislation that would have allowed the opening of charter schools and 1,000 education savings accounts for special-needs or bullied students to use toward a private education option.

The teachers strike ended Wednesday with the adjournment of state lawmakers who failed to make a motion to reconsider the bill within 24 hours of the decision Tuesday to postpone it.

“They are striking over potentially giving 1,000 ESAs [education savings accounts] to kids with special needs and allowing for 7 charter schools. Let that sink in,” Lindsey Burke, director of the Center for Education Policy at The Heritage Foundation, tweeted in response to news of the strike.

West Virginia remains one of the few states with no charter schools as an alternative to failing public schools.

Lawmakers in the state House of Delegates put off the education reforms as teachers showed up at the Capitol to protest provisions they argued would reallocate funding from traditional public schools to charter schools, though the bill allowed no more than seven to be created.

The teachers union planned to confer with members daily until the end of the legislative session March 9. Republicans control both the state Senate and the House of Delegates.

“Senate Bill 451 is now dead,” Fred Albert, president of the American Federation of Teachers West Virginia, said Wednesday at the Capitol. “It’s gone and will not be resurrected.”

Some of the provisions of the bill that Albert and union members supported included a 5 percent boost in teacher pay, incentives for personal leave, and an additional $24 million for student support services.

But the teachers union said it was left no choice but to organize a strike Monday after the Senate returned the bill to the House with an amendment adding the charter schools and education savings accounts, decreasing a bonus for teachers based on attendance, and changing a police-in-school initiative to a school safety fund.

Although it is illegal to strike in West Virginia, this was the second strike in 13 months, closing schools within 54 of the state’s 55 counties.