GOP Pounces by Allowing Democrats to Vote on Their Own Idea 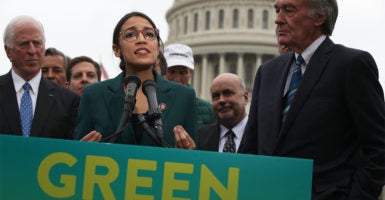 “The Green New Deal is the only way to save the earth from utter extinction. If you keep standing in the way, troglodytes, we are doomed.”

“Why are you sabotaging our legislation?!”

If you think this is an exaggeration of the illogical position of Democrats and their Green New Deal, I give you Sen. Ed Markey. D-Mass.

As soon as next week, Senate Majority Leader Mitch McConnell, R-Ky., will seize on actual liberal positions to paint Democrats as radicals. He’s going to put the Green New Deal up for a vote. Or, here’s how The Associated Press put it: “McConnell wields Green New Deal as bludgeon against Dems.”

“This isn’t a new Republican trick,” tweeted Markey, who co-sponsored this nonbinding resolution that will save the planet. “By rushing a vote on the #GreenNewDeal resolution, Republicans want to avoid a true national debate & kill our efforts to organize. We’re having the first national conversation on climate change in a decade. We can’t let Republicans sabotage it.”

What are Republicans “rushing” exactly? If Sens. Elizabeth Warren, D-Mass.; Kirsten Gillibrand, D-N.Y.; and Cory Booker, D-N.J., feel comfortable endorsing it and thus making the plan part of their presidential aspirations, why shouldn’t the entire Senate vote on it, as well?

How exactly would a vote “sabotage” or “kill” the Green New Deal, which is nothing but a resolution “recognizing the duty of the Federal Government to create a Green New Deal”?

It’s a “show vote” on purpose. It’s an affirmation of intent.

Does Markey not support securing the future of his own prospective bill? Why did he file it? And how exactly could the co-authors of the Green New Deal not be organized? They’ve been scaremongering Americans about impending catastrophic climate change for the past 30 years, at least.

Moreover, Markey’s co-sponsor, Rep. Alexandria Ocasio-Cortez, D-N.Y., has already written a broad proposal of policy aims that, in all honesty, would probably be the only way to achieve the goals set forth by Democrats. Has anyone asked Markey whether he believes Ocasio-Cortez’s wish list contains worthy goals?

Much of the media coverage of the Green New Deal informs people that climate scientists have warned that terrifying events will befall us soon if we don’t act immediately.

What they don’t tell us is that anyone with even a rudimentary grasp of economic reality understands that a state-run system that coerces Americans to generate 100 percent of their energy through inefficient and expensive renewable sources within 10 years would trigger a cratering of the U.S. economy.

There were “clear goals” on an FAQ page about the Green New Deal written by its author (since pulled by Ocasio-Cortez’s office after it was widely mocked), including the elimination of 90 percent of our energy (including nuclear) and the eventual elimination of most cars, air travel, and beef.

The Green New Deal is also a poorly constructed Trojan horse teeming with such socialist favorites as “free” higher education, guaranteed housing, and “economic security” for all Americans, even those who are “unable or unwilling” to work, among many other things.

A number of Democratic Party presidential hopefuls endorsed the Green New Deal before the initial proposal was pulled. They fully understood the goals and timeline set by its author. No one forced them to support the idea in this form.

But what sounds quixotic to the ears of activists and primary voters may sound like some half-baked, self-destructive absurdity to others—which is probably why there’s been a concerted media effort to memory-hole Ocasio-Cortez’s FAQ page on the proposal. It is certainly why Markey is nervous about a vote. The junior senator from Massachusetts went on to accuse McConnell of aspiring “to silence [Democrats’] voice so Republicans don’t have to explain why they are climate change deniers.”

McConnell’s Sith-like evil genius is so extraordinary that he now has the ability to “silence” voices by allowing them to vote “yea” on the very words they wrote and filed in Congress.

Democrats have become maestros of vague generalities, idealistic pronouncements, and scary 40-year predictions. Then again, they have a lot of trouble defending the massive intrusions and costs that it would take to implement their vision—especially in a world that’s getting better in every quantifiable way. Rarely are they asked to do so by their compliant media allies.

Ocasio-Cortez’s greatest sin was injecting some reality into the debate. You don’t wean America off its affordable and predominant energy sources without reinventing the entire economy through authoritarian intrusions and enormous economic pain.

Of course they don’t want to vote on the Green New Deal resolution. They would prefer to incrementally and deceitfully enact it.