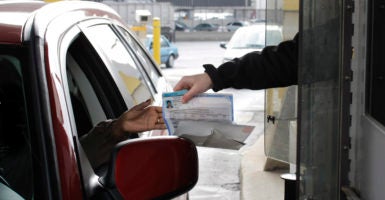 The New York City Council passed a resolution by a full vote Wednesday that will edge the state Assembly and Senate toward passing legislation allowing illegal immigrants to obtain driver’s licenses, according to a report by Columbia University’s student-led NY City Lens.

City Councilman Ydanis Rodriguez, a Democrat representing the 10th Council District, introduced the nonbinding resolution to the city’s Committee on Immigration. Passage indicates the City Council’s support of the Driver’s License Access and Privacy Act, initially introduced during the 2018 legislative session, but never made it to Gov. Andrew Cuomo’s desk.

The legislation is sponsored by state Assemblyman Marcos Crespo and state Sen. Luis Sepulveda, both Democrats. If the Democrat-controlled Legislature can get it to the governor, Cuomo has said he will sign the bill.

After the resolution’s victory at City Hall, Rodriguez told a crowd gathered outside:

I am an immigrant, born and raised in another country, but I also belong to the United States. We are sending a message to the state of New York that 8.5 million New Yorkers are saying enough is enough.

Rodriguez, who has cited road safety and driver accountability as reasons for the bill, has tried to make a political statement with the resolution.

“I believe that the state of New York has a great opportunity, not only to challenge President Trump, but also lead by example, and that’s what I’ve been advocating for years,” Rodriguez told the Daily News. “By allowing them to have their driver’s license, it will make our state safer, and it will give relief today, and it will recognize their contribution to our economy.”

Skeptics of the bill include City Council Minority Whip Joseph Borelli, a Republican.

“This is the latest in another attempt to blur the line between legal and illegal and the rule of law versus open borders,” Borelli told the Daily News. “I’m sure Albany is not going to be shocked that [in] the liberal City Council, many City Council members are in support of this, and I don’t think it’s going to tip the scale either way.”

This isn’t the first time New York has considered giving illegal immigrants access to driver’s licenses. Former Democratic Gov. Eliot Spitzer’s 2007 call for licenses for illegal immigrants was defeated due to a backlash regarding fears of terrorism.