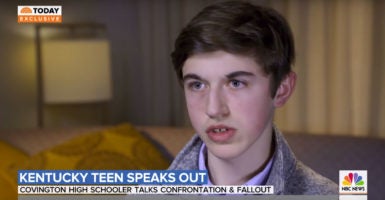 The shortened clip of Nick Sandmann, pictured during his January interview with the "Today" show, that the media and others seized upon featured him and his fellow students from the all-male, Kentucky-based Catholic high school wearing “Make America Great Again” hats. (Photo: Screenshot via NBC's "Today")

An “avalanche of false accusations, false portrayals, and cyberbullying” are the main reasons cited for likely legal action on behalf of Covington Catholic High School student Nick Sandmann and his family, according to his attorneys.

On Jan. 25, Sandmann’s legal team, Todd McMurtry and L. Lin Wood—a prominent defamation and libel lawyer—sent more than 50 letters to politicians, celebrities, and media outlets as a warning of potential civil lawsuits for their false and disparaging reactions to the viral video clip of an incident between Sandmann and Native American activist Nathan Phillips at the March for Life demonstration on Jan. 18.

“A mob comprised of activists, church and school officials, members of the mainstream print and broadcast media, and individuals on social media, including elected public officials and celebrities, rushed to condemn and vilify this young man,” Sandmann’s attorneys said in their statement.

The shortened clip of Sandmann that the media and others seized upon featured him and his fellow students from the all-male, Kentucky-based Catholic high school wearing “Make America Great Again” hats, otherwise known as MAGA hats. They were approached by Phillips, who was beating a drum as he inserted himself into the group.

Sandmann, a junior, stood silently smiling as Phillips continued to beat his drum in front of him. The 16-year-old was smeared and berated nationally as being disrespectful and racist as the clip spread across the radar of social media and prominent news organizations.

As more complete video footage emerged of the events leading up to the Sandmann-Phillips interaction, it became clear that the Covington students were earlier being harassed with racist and homophobic slurs by a group of adult men who belong to the Black Hebrew Israelites.

In response to their unwarranted intimidation, the students stood firm and sang their school chants to drown out the provocateurs as they waited for their bus. This is when Phillips, who noticed the crowd of MAGA hats, injected himself between the two groups, falsely claiming that the students were the instigators.

But even after the truth surfaced, the public vilification and disavowal of Sandmann largely went unretracted. McMurtry says he will be demanding retractions, in addition to apologies and possible litigation.

Among the recipients of the letters from Sandmann’s attorneys are The New York Times; The Washington Post; CNN; and National Public Radio; dioceses of Covington and Lexington; the archdioceses of Louisville, Kentucky, and Baltimore; and Sen. Elizabeth Warren, D-Mass.

The letter requests organizations and individuals to preserve documents related to the Covington Catholic incident that took place at the March for Life, such as “drafts of stories, emails between colleagues discussing the incident, and, for celebrities and individuals, any tweets or statements sent to the public,” McMurtry told Fox News.

“We fully expect that a multitude of civil lawsuits will be filed and aggressively pursued,” their press statement added. “We recognize that justice for Nick will not be achieved quickly, but we are dedicated to achieving it for this young man regardless of time or expense.”

Their statement also expressed the hardship the Sandmann family has experienced due to the cutting treatment they received from the false accusations made against their son:

Nick and his family have experienced one of the worst sides of our present society. As their lawyers, we intend to exercise our best efforts as advocates to show Nick and his family another side of our society—that we are a society that survives and flourishes from the fact that it is based on the rule of law. A system of justice that demands that truth prevails and the wrongdoers be held accountable for the harm they have inflicted on Nick and his family.

In addition to the letter, McMurtry and Wood released a video on Feb. 1 titled “Nick Sandmann: The Truth in 15 Minutes.” The video goes through the timeline of events that led to the incident and the fallout after.

A full list of the individuals and entities who will be receiving a letter from Sandmann’s attorneys is below: