Covington Student Was Indicted for the Sin of Smirking While White 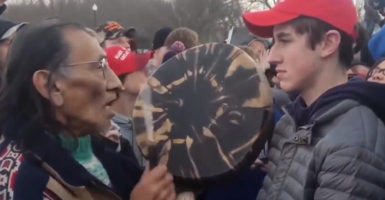 A student from Covington Catholic High School is approached by a Native American man in a clip that went viral. (Photo: Screenshot via Today Show/NBC)

This article originally appeared at The American Mind, a publication of the Claremont Institute.

Suppose the second video had never come out and the Covington Catholic High School boys had not been exonerated.

Suppose the media had not been compelled to issue pathetic, half-hearted apologies for stoking the flames of hatred after the incident.

Suppose the pundits had not sheepishly deleted their rush-to-judgment tweets condemning the boys.

What exactly would the boys have been guilty of based on the 3 minutes and 44 seconds of footage in that first video?

After all, no one laid a finger on Nathan Phillips and the other two Native Americans banging their drums and chanting. No one yelled at them. No one insulted them. No one asked them to leave.

The boys chanted along and acted silly. They surrounded the men in order to see what was happening, the way any crowd would if someone was making noise or playing an instrument in public. They were all smiling and being rather good-natured.

The only profanity in the video comes from a scowling woman who yells out “f—ing mob mentality” and rolls her eyes at the boys.

Those with more delicate sensibilities might accuse the boys of being a little too rowdy. I, for one, incline to a Milford Academy “children should be neither seen nor heard” pedagogy (I also think students should wear uniforms and caps should be worn only at baseball games, and preferably only by the players). In any case, few others in America today would agree.

Nathan Phillips later tearfully recounted that he had heard the boys say—not chant—“Build that wall, build that wall.” The subsequent longer video did not corroborate his claims.

Should another video prove Phillips’ recollection correct, is it now forbidden in American to repeat commonplace political slogans in the public square?

What about the specific boy in question, whose name I will not repeat in a futile effort to respect what little privacy he has left after Friday’s incident?

He did not move. He did not say a word. You could almost say he was stoic (I say almost because the stoics are not known for their smiles). He stood there motionless for almost three minutes as Phillips, who had walked over to him, loudly banged a drum in his face and chanted—rather obnoxiously, one might observe.

But it wasn’t a smile, the mendacious media explained. It was—brace yourselves—a smirk! The boy stood there and smirked. And for that he must be “punched in the face,” expelled from school, and denied admission to college. His name should forever be ruined on the internet. He should become the face of evil in the 21stt century—or at least until the next manufactured scandal erupts.

It goes without saying that if Covington had been an all-black school, a girls’ school, or a Mexican high school visiting the U.S., the video would have sunk without a trace in the great abyss of unwatched YouTube videos.

And it also goes without saying that if the boys had been wearing “Love Trumps Hate” or “Feel the Bern” caps, the episode would not have sent the media into an Orwellian frenzy of hate.

The kid in question, however, was part of the accursed white race that has wrought unspeakable evils onto humanity. He was a male and thus complicit in the patriarchal structures of oppression that subjugate women. He was the embodiment of power and privilege.

Worst of all, he wore a MAGA cap. Therein lies his crime.

The inherited diseases of whiteness and masculinity, though incurable, can at least be mitigated and contained if the patient is willing to demonstrate good will by embracing leftist views and perpetually flagellating himself publicly for the sins of his race and his sex.

A MAGA hat is incontrovertible evidence that you refuse to take your medicine. While it does not necessarily make you a white supremacist, it (at least) suggests you could be. It indicates that you might belong to the half of Trump supporters whom Hillary Clinton put into her basket of deplorables, “the racist, sexist, homophobic, xenophobic, Islamophobic—you name it.”

The hysterical reaction to the first video points ultimately to an unsettling conclusion. Standing in silence with a smile before a person of color—or presumably, a member of any other aggrieved, oppressed identity group—is now a crime for deplorable white males of all ages.