Trump Has 1 Piece of Advice for Lawmakers Negotiating Border Funding 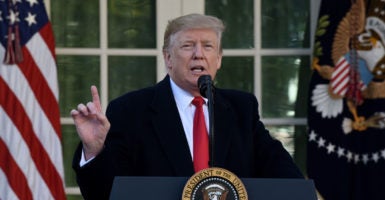 President Donald Trump warned that lawmakers in Washington, D.C., negotiating border security funding are “[w]asting their time” if they do not include a physical barrier via Twitter Wednesday.

“If the committee of Republicans and Democrats now meeting on Border Security is not discussing or contemplating a Wall or Physical Barrier, they are Wasting their time!” Trump wrote on Twitter Wednesday morning.

Trump entered contentious negotiations with congressional leaders this week after reopening the federal government Friday with no concessions on wall funding.

Trump and congressional Democrats disagreed on the president’s call for roughly $5 billion to build a U.S.-Mexico border wall, leading to a historic 35-day shutdown that ended Friday. Democratic leaders Nancy Pelosi and Chuck Schumer said in a Friday press conference that they’re opposed to a wall, reported Roll Call.

The compromise will be worked out by a bipartisan group of lawmakers on the House and Senate appropriations committees, reported The Wall Street Journal. The group is made up of the following Senate Republicans:

And the following Senate Democrats:

And the following House Republicans:

They have until the temporary funding bill expires on Feb. 15 to come to an agreement. If they cannot reach a deal, Trump could declare a national emergency to build a southern border wall.