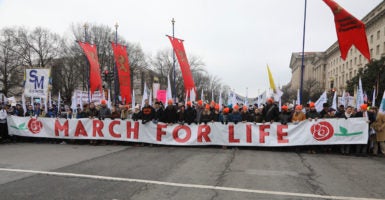 In remarks delivered by video to the annual March for Life on Friday, President Donald Trump vowed to veto any legislation that doesn’t protect life.

“Today, I have signed a letter to Congress to make clear that if they send any legislation to my desk that weakens the protection of human life, I will issue a veto, and we have the support to uphold those vetoes,” Trump said.

Trump called every child “a sacred gift from God” and noted his administration’s pro-life policies, such as ending federal funding for abortions abroad.

“We are supporting the loving choice of adoption and foster care, including through the support of faith-based adoption services,” the president said in his video message to tens of thousands. “I am supporting the U.S. Senate’s effort to make permanent the Hyde Amendment, which prohibits taxpayer funding for abortion in spending bills.”

Trump’s video remarks came after a live introduction to the outdoor audience at the National Mall in Washington by Vice President Mike Pence, who called Trump “the most pro-life president in American history.”

“We know in our heart of hearts that life is winning in America again,” the vice president told the cheering audience from the stage, where his wife, Karen, stood next to him.

The vice president said the Supreme Court’s 1973 Roe v. Wade decision, which legalized abortion nationwide 46 years ago this month, turned its back on that right.

“But, in that moment, a movement was born—a movement defined by compassion and love, a movement animated by faith and truth, and a movement that has been winning hearts and minds every day since,” Pence said.

The vice president spoke after an introduction from his wife, who he defended after the left attacked her this week because she returned to work as a part-time art teacher at a Christian school in Springfield, Virginia, which adheres to traditional Christian beliefs on sex and marriage.

“My wife is many things. She’s a mother. She’s an advocate for military families. She’s traveled across this country,” Pence told the crowd. “She’s even an art teacher at a Christian school, and I couldn’t be more proud of my wife, second lady Karen Pence.”

Karen Pence praised the crowd that traveled from across the country to the annual march to stand up for life.