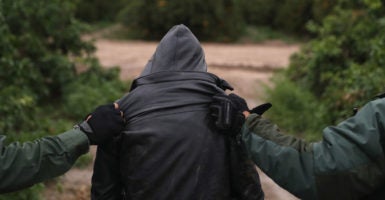 In this 2018 photo, U.S. Border Patrol agents detain an illegal immigrant after capturing his group in an orchard near McAllen, Texas. (Photo: John Moore/Getty Images)

Customs and Border Protection agents were able to apprehend a previously deported child sex offender who tried re-entering the country with a group of other foreign nationals.

A CBP camera operator on Jan. 11 discovered 24 individuals illegally crossing into the United States near the San Luis, Arizona, port of entry. The caravan, which was made up mostly of Central American family units, immediately surrendered when confronted by agents.

Among the group was Marcos Velasquez-Taperio, a 37-year-old Guatemalan national who was convicted of aggravated indecent liberties with a minor in Ford County, Kansas, in 2009. After serving 32 months in prison, Velasquez-Taperio was deported to his home country. Customs and Border Protection, which reported the arrest Wednesday, said Velasquez-Taperio will now be prosecuted for re-entry after deportation.

News of the arrest immediately followed the apprehension of Wilfredo Perez-Aguilar, another sex offender from Guatemala. Perez-Aguilar, who was caught Monday trying to cross the U.S.-Mexico border in Southern California, was convicted in 2005 of sexual abuse and rape of a minor under the age of 12 in Kentucky.

“I am proud of our Border Patrol agents for making this arrest,” the chief patrol agent of the El Centro Sector in California, Gloria Chavez, said in a Tuesday statement. “Deported sexual predators seeking to illegally enter the U.S. will be prosecuted to the fullest extent of the law.”

News of the arrests come as the U.S. federal government remains in partial shutdown over immigration enforcement.

President Donald Trump has demanded a budget that includes funding for a wall on the country’s southern border. However, most congressional Democrats remain fiercely opposed to the concept of a massive wall, suggesting it to be immoral and a waste of taxpayer money. The standoff has resulted in what is the longest government shutdown in history, with no apparent compromise on the horizon.

“We’re not going back until the Democrats do what they know they have to do,” Trump said during a Tuesday conference call. “Stay together—we’re going to win.”