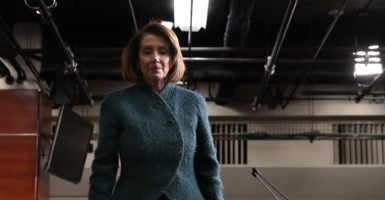 “House Democrats are using parliamentary rules to consolidate power in Speaker Pelosi’s hands, push forward a liberal agenda, and deny conservatives an equal voice in what is supposed to be a legislative body that represents all Americans,” Jessica Anderson, vice president of Heritage Action for America, told The Daily Signal in an email.

Heritage Action, which published an issue brief on the new rules in the Democrat-led House, is the lobbying and advocacy arm of The Heritage Foundation.

Pelosi, D-Calif., and the Democrats adopted the new rules Jan. 3, when they took over the House. Every two years, the lower chamber votes to adopt a set of rules for that session of Congress.

This is necessary “because the rules of the House do not transfer from one Congress to the next—a tradition unique to the House and not shared in the Senate, which is a continuous body,” the Heritage Action paper says.

Specifically, the new rules package prohibits discrimination against employees with regard to gender identity and sexual orientation, a change that could coerce lawmakers who hold traditional views of marriage.

“This could force members who hold traditional views on sexual orientation and gender to hire employees that disagree with the member’s religious and sincerely held beliefs or political views,” Heritage Action’s paper says.

At the same time, however, the new rules broaden the religious liberty of others by allowing lawmakers to don religious headwear in the House chamber.

Ocasio-Cortez and Khanna said on Twitter that they would vote against it because of the inclusion of a “pay-as-you-go” provision.

Also shortened to “pay-go,” the measure “requires that any new legislation that increases deficits (whether through an increase in mandatory spending or decrease in revenues) must be fully offset by other increases in revenues or decreases in mandatory spending so that the new legislation does not add to the budget deficit,” according to the Peter G. Peterson Foundation.

Since the tax cuts and other reforms went into effect Jan. 1, 2018,  Americans have had on average $1,400 more in their paycheck. That increases to just under $3,000 more for married couples with two children, writes Kevin D. Dayaratna, a senior statistician and research programmer in Heritage’s Center for Data Analysis.

The rules also scrap a requirement that three-fifths of House members must vote to increase taxes.

“Without this protection, the House would be able to more easily increase income taxes, endangering the tax cuts passed a year ago,” Romina Boccia, a fiscal and economic expert at Heritage, writes in a commentary co-authored with colleagues Justin Bogie, Adam Michel, and Rachel Greszler.

The rules also reverse past protocol in which “proposed amendments that would increase or create new spending must be fully paid for,” they write, and make it easier for the House to pass legislation without funding to implement it.

This makes it easier for lawmakers to increase deficit spending, conservative critics say.

“While the Senate and presidency are controlled by Republicans, the threat of an income tax increase is small,” Michel, a Heritage policy analyst who specializes in taxes, told The Daily Signal in an email.

“However, the rule change sends a strong signal that the new House is serious about raising taxes, and if they had their way the threat would be imminent.”

Michel added that House Democrats likely will try to raise taxes on all Americans.

“It is most revealing that they did not go with their original proposal to only remove the supermajority requirement for tax increases on the wealthy,” he said. “Instead they settled on fully repealing the supermajority, signaling they plan to raise taxes on all Americans, not just the wealthy.”