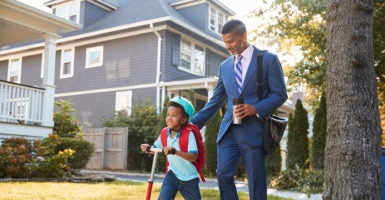 The average American will take home on average $1,400 more of their paycheck in 2018 thanks to tax reform. (Photo: monkeybusinessimages/Getty Images)

Ryan Hein is a member of the Young Leaders Program at The Heritage Foundation.

The Tax Cuts and Jobs Act has been one of the strongest and boldest reforms of President Donald Trump’s first term in office. According to analysis from The Heritage Foundation, the tax law will give hardworking Americans tax breaks in every congressional district and in every state.

Across the nation at large, the average American will take home on average $1,400 more of their paycheck in 2018. For married couples with two children, that figure doubles to just under $3,000.

>>> You can find the average tax cut in your district here.

While higher-taxed districts will see more in dollar savings as a result of the tax cuts, they are certainly not the only winners from the Trump tax cuts. In fact, lower-income districts will feel more relief in their tax burden, as they will see a higher percentage of their taxes cut than Americans in higher-income areas.

For example, in New York’s 15th Congressional District, tax filers on average will notice a decrease of over 30 percent in their tax bill in 2018.

All across the country, the manifestations of this policy are quite impressive. Americans are better off from the tax cuts because they get to keep a larger portion of their paychecks. Moreover, the changes in tax rates are providing better economic incentives leading to even higher paychecks.

As a result, Texas’ 7th Congressional District can expect to see on average $35,000 more in take-home pay over the next 10 years. By the same year, a family of four in Virginia’s 10th Congressional District should enjoy an average of almost $70,000 of their own money back in their pocket. This money can then be spent on daycare, college tuition, or retirement savings, among many others.

Unfortunately, some in Congress have called to undo this tax reform, which would effectively wipe out the benefits of the law. According to our analysis, the cost of repealing the tax cuts in 2020 would be an average of $26,906 in lost income gains over the following 10 years. For a family of four, that cost would be over $45,000.

The Tax Cuts and Jobs Act is allowing Americans in every community across the nation to take home more of their paycheck. Congress should not only keep the law in place but should also work toward making the law permanent well before the its current 2025 “sunset” date.