The Grinch Strikes as a Hostile Drone Brings London Airport to a Halt, Affecting Tens of Thousands of Travelers 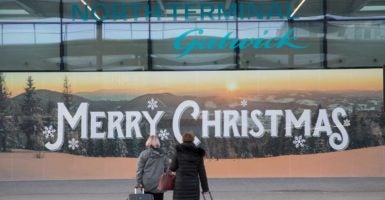 London's Gatwick Airport came to a standstill after a drone was spotted multiple times in the vicinity. (Photo: Joe Newman Xinhua News Agency/Newscom)

As readers speed off for Christmas celebrations with family and friends, just imagine being stuck at the airport because a drone was flying around it, making it dangerous for planes to land or take off.

That is exactly what happened at London’s Gatwick Airport over the past two days.

On Wednesday night, reports of a drone being flown around the airport caused flights to be canceled and incoming flights were diverted. Early the next morning, a drone was once again spotted, bringing the airport to standstill all day Thursday as the drone kept being sighted.

Police believe that this constant flying near the airport is a purposeful malicious act to disrupt air travel, but “there are absolutely no indications to suggest this is terror related.” Police initially ruled out shooting down the drone over a legitimate concern of stray bullets but later that day the army was brought in to assist. Authorities are now saying they could shoot down the drone if they see it again.

While the airport is set to reopen Friday, airport authorities and police remain on edge. One hundred ten thousand people were supposed to travel through Gatwick on Thursday, all of whom had flights canceled or disrupted. Other airports are scrambling for solutions to the potential threat of malicious drones.

There remains an active investigation into the perpetrator and these developments are still unfolding. Thankfully, the drone did not seek to engage in any physical attacks on airplanes but for now, a single drone has played the part of the Grinch this Christmas with its sheer presence above Gatwick Airport.

Earlier this year, Heritage Foundation experts warned of the risk of malicious drones and the need to develop a more robust counter-drone legal framework with the right tools in the hands of law enforcement. While Congress did expand counter-drone authorities this past year, more work remains to be done so that we are better prepared for something like what has happened in Gatwick.