6 Gifts for the Supreme Court Fanatic in Your Life 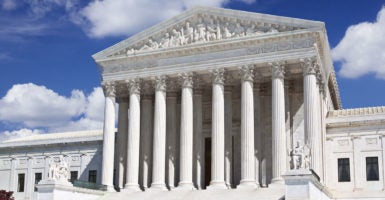 “If you’re going to be a good and faithful judge, you have to resign yourself to the fact that you’re not always going to like the conclusions you reach,” the late Justice Antonin Scalia said. (Photo: OlegAlbinsky/Getty Images)

Are you wondering what to give that friend, family member, or colleague who loves the Supreme Court?

Here are some gift ideas that should delight any Supreme Court watcher, brought to you by The Heritage Foundation’s “SCOTUS 101” podcast.

On the bench, Justice Clarence Thomas is well known for rarely speaking, unlike his colleagues, who often bombard lawyers with questions during oral arguments.

But the justice has no trouble making his views known through his writings. In fact, Thomas routinely authors more opinions than his colleagues, and almost twice as many majority, concurring, and dissenting opinions in the past few terms.

Nevertheless, he has a reputation as Quiet Clarence.

Judges aren’t supposed to be politicians in robes, and their job is to interpret the law as it is written, rather than how they wish it was written.

A classic phrase from the late Justice Antonin Scalia reflects the challenge of the job.

“If you’re going to be a good and faithful judge, you have to resign yourself to the fact that you’re not always going to like the conclusions you reach,” he said. “If you like them all the time, you’re probably doing something wrong.”

Historian Richard Brookhiser has written about presidents, Founding Fathers, and many other notable historical figures. He now tackles the most consequential chief justice of the United States, John Marshall.

“Before Marshall joined the Supreme Court, it was the weakling of the federal government, lacking in dignity and clout. After he died, it could never be ignored again,” Brookhiser wrote. “Through three decades of dramatic cases … Marshall defended the federal government against unruly states, established the Supreme Court’s right to rebuke Congress or the president, and unleashed the power of American commerce.”

“For better and for worse, he made the Supreme Court a pillar of American life,” the historian wrote.

The newest Supreme Court justice, Brett Kavanaugh, is a serious scholar, having written extensively about the separation of powers and statutory interpretation during his 12-plus years on the bench.

But he’s also an everyman who likes to cut loose, watch sports, and enjoy a few brewskis.

The ladies of the Supreme Court have blazed trails to reach the bench, and they “bring the heat.” This item features the female SCOTUS squad, Justices Sonia Sotomayor, Ruth Bader Ginsburg, and Elena Kagan.

Get ahead of the curve with a nod to federal appeals court Judge Amy Coney Barrett.

She has already survived a confirmation hearing in which Senate Democrats asked inappropriate questions about her Catholic faith, with Sen. Dianne Feinstein, D-Calif., declaring, “The dogma lives loudly within you, and that’s of concern.”

Barrett is rumored to be a top contender for a future Supreme Court vacancy.