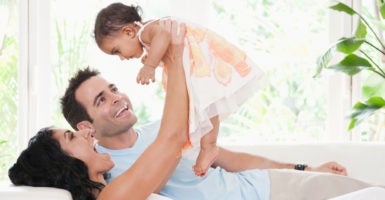 A “permanent link” between biological parents and their children matters, medical ethicist Melissa Moschella says, calling it something “so deep that we can't forget about the importance for children.” (Photo: PBNJ Productions/Blend Images/Newscom)

Children’s needs should come before adult desires in marriage and other domestic partnerships, advocates of children’s rights argue.

For starters, it’s good for a child to know who his mother and father are, college professor Melissa Moschella said at a recent event focused on surrogate pregnancies held at The Heritage Foundation’s headquarters on Capitol Hill.

Moschella, author of the book “To Whom Do Children Belong? Parental Rights, Civic Education, and Children’s Autonomy,” said the rights of children who are products of donor conception and surrogacy are especially at stake because those children are robbed of knowing who their mother or father is.

“So that’s why this is this permanent link that exists between biological parents and their children that matters,” she said. “Other things matter, too. But this is something that is so deep that we can’t forget about the importance for children.”

Also on the panel was Katy Faust, founder and director of Them Before Us, an organization dedicated to furthering the rights of children, who said the issue is personal for her: Faust’s mother has been in a relationship with another woman for 30 years, since her parents divorced.

While Faust made clear that her mom’s partner is her friend, she stressed that she believes an adult’s wants should not come at the expense of a child’s well-being.

“We spent so much time talking about adults and what adults wanted, but it’s kids who are the true victims when we get policy wrong,” Faust said. “And so we needed to major on kids and their rights and their needs instead of being obsessively focused on what adults want. They are the real victims of the marriage debate.”

Faust said her organization, Them Before Us, is launching a global movement that she hopes will amplify the critical rights of children.

“We are going to take over every part of this conversation when it comes to marriage and parenthood and reproductive technologies, that anytime any of these things are discussed, primarily we’re going to consider the rights of the child,” Faust said.

“We’re going to put their stories right in front of any legislature that seeks to redefine parenthood or normalize motherlessness or fatherlessness or treat it as a commodity by utilizing commercial surrogacy.”

Citing several studies, Moschella said children conceived in a surrogate situation deeply care about finding their biological parent or parents. In a 2005 study of donor-conceived 12- to 17-year-olds from 29 households, she said, “over 80 percent said that they were likely to request the donor’s identity and pursue contact.”

Moschella said it is important, however, to distinguish the situations of donor-conceived children from those of children who are adopted.

It could be a sign that the biological parents love the child so much that though they really wanted to raise the child, [they] realize that they were in no sort of situation to be able to do so in this way, and so allowed others who are more competent and capable of doing that to raise that child right.

Jeff Shafer, a senior counsel at Alliance Defending Freedom who was the third panelist, said the surrogacy movement deprives society of the true meaning of parenthood.

Children in effect are being told that they can do without the “natural categories” of a mother and father who care for them, Shafer said.

“And the law [is] cooperating with and affirming this at every turn, indeed announcing that this is the requirement of justice and equality,” he said. “We’re getting schooled into a new vision of human nature.”