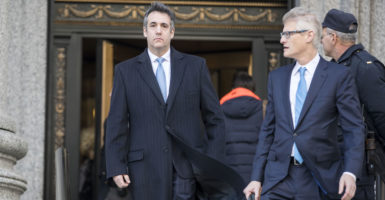 President Donald Trump’s former personal lawyer, Michael Cohen, pleaded guilty to the Mueller team to lying to Congress about the timing of a proposed Trump building project in Moscow.

“Mueller’s charge was to uncover crimes and indict people, not write a report,” former Watergate prosecutor Nick Akerman told The Daily Signal, expressing skepticism of reports the probe would wrap up before the end of 2018.

For weeks, pundits and news reports asserted that Mueller was close to wrapping up the probe—possibly even by the end of the year—with a report detailing his legal team’s findings.

“This week’s events have given Mueller a better vehicle to continue his investigation at a time when some in the public were feeling investigation fatigue,” Kendall Coffey, a former U.S. attorney for the Southern District of Florida, told The Daily Signal.

A Trump Tower in Moscow was never built, but the negotiation—which Cohen now says continued to June 2016—seems more significant than a meeting at the Trump Tower in New York that same month between a Russian lawyer and Trump campaign officials, Coffey added.

“Mueller benefits from a personal lawyer for Trump trying to make a deal in Russia in 2016,” said Akerman, who served on the teams of special prosecutors Archibald Cox and Leon Jaworski during the Watergate investigation in the early 1970s. “That is more suggestive of a direct connection than a isolated meeting to look at suggested opposition research.”

Still, aside from the probe’s capacity to generate headlines, former prosecutors differ on how serious the new developments are on a legal spectrum.

Of Cohen’s guilty plea, Akerman—now in private practice in New York—said, “On a scale of one to 10, this is a 20.”

“Why would he plead guilty to additional charges after he’s already pleaded guilty in the campaign finance violation?” he continued. “Prosecutors prefer to get guilty pleas lined up with what they’re investigating, and Cohen is a major witness to the American side of the conspiracy with Russians.”

Akerman anticipates that Cohen holds what has been the elusive information linking Trump’s business dealings with the timeline of Russians hacking the Democratic National Committee computers. He laid out his theory in an op-ed in the New York Daily News.

Cohen told Congress that negotiations for a Trump Tower in Moscow wound down in January 2016. He now tells prosecutors negotiations were going on until June 2016, well into the presidential campaign.

Hacked DNC emails were leaked online in June and July of 2016, most notably to WikiLeaks. Also, Trump campaign officials met with a Russian lawyer at Trump Tower in New York in June.

Thus far, Mueller has released no public evidence of cooperation between the Trump campaign and Russians. The president, who has repeatedly denied collusion, called Cohen “a weak person” on Thursday and accused him of trying to get a reduced sentence.

Oh, I get it! I am a very good developer, happily living my life, when I see our Country going in the wrong direction (to put it mildly). Against all odds, I decide to run for President & continue to run my business-very legal & very cool, talked about it on the campaign trail…

….Lightly looked at doing a building somewhere in Russia. Put up zero money, zero guarantees and didn’t do the project. Witch Hunt!

Cohen previously pleaded guilty to violating federal campaign finance laws for paying off two women before the election who claim to have had affairs with Trump. Prosecutors counted the payment to the two women as an in-kind contribution to the Trump campaign.

While a June 2016 timeline may seem to connect several events, there is still scant known evidence of a conspiracy between the Trump campaign and Russian operatives, said Coffey, the former federal prosecutor from Florida.

“This puts a sizable dose of Russian dressing on the overall picture, but legally, this is not a game-changer,” Coffey said.

Many of Mueller’s prosecutions have been for lying to investigators or lying on official forms, Coffey noted, which he called “process crimes.”

“The special counsel has continued bringing process crimes, but has not established an underlying crime that separate charges against the Russian operatives involved with the Google ads, Facebook ads, and hacking were connected to the Trump campaign.”

Coffey stressed there’s still much the special counsel’s office knows that the public doesn’t know yet.

However, he noted the email between Donald Trump Jr. and the Russian lawyer, Natalia Veselnitskaya, and their meeting in the Trump Tower in New York mentioned nothing about the Moscow development. Further, Coffey said, Cohen didn’t attend the meeting.

“It’s hard to conclude Cohen’s very preliminary exploration of a Moscow development resulted in a systematic hacking of the DNC,” Coffey said. “Also, there is no connection of Cohen with the Trump Tower meeting in New York. It seems almost certain that if these things were connected, he would be there.”

The Mueller investigation is another example of a federal prosecutor piling up charges to present as damaging an assessment as possible, said Sidney Powell, a former federal prosecutor who was chief of the appellate divisions in the Western and Northern districts of Texas.

She anticipates Mueller will drag the case out to show that he can, but doubts the Cohen case will amount to much.

“I can’t see anything in Cohen’s guilty plea that he would have actually been convicted of if he had not pleaded,” Powell said. “He’s trying to make this easy on himself. He’s under massive pressure.”

A 2007 Quinnipiac University Law Review study found only six convictions for lying to Congress since the 1940s.

“I don’t have a problem with seeing this applied,” Powell said. “But this should be equally applied.”