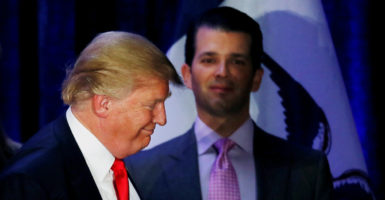 Even if Donald Trump Jr. helped set up a meeting last year with a Russian lawyer in hopes of learning dirt on Hillary Clinton, the president’s son-in-law, Jared Kushner, and another official Trump campaign operative could face greater legal problems, a former FBI official says.

“For today, and this could change tomorrow, but today I would say that Donald Jr. was not a member of government and does not have a legal obligation,” Ron Hosko, a former assistant FBI director who was assigned to the agency’s Criminal Investigative Division, told The Daily Signal.

“If it is proven that Donald Trump Jr. was gleefully willing to go to a meeting with a Russian agent, the question is still: What is his legal obligation?”

President Donald Trump’s eldest son last week released an email chain from June 2016 concerning his interest in attending a meeting that turned out to be with Russian lawyer Natalia Veselnitskaya and others.

Trump Jr. expressed that interest after an entertainment promoter who was a business acquaintance told him that someone connected with the Russian government wanted to share negative information about Clinton, who was about to become Democrats’ nominee for president.

Veselnitskaya provided no such information and wanted to talk about adoption policy, Trump Jr. said.

Trump also had yet to win the Republican nomination. But critics and political opponents say the meeting proves a willingness by the president’s son to “collude” with someone he thought was associated with the Russian government.

Trump Jr., now executive director of the Trump Organization, had no formal role in his father’s presidential campaign. But two others who attended the same meeting last summer did: Paul Manafort, then campaign manager, and Kushner, Trump’s son-in-law, who worked in a variety of campaign roles.

The legal situation could be entirely different for Manafort and Kushner, said Hosko, now president of the Law Enforcement Legal Defense Fund, which provides legal advice and covers some legal fees in duty-related cases.

“Now that is different.,” Hosko said of Manafort and Kushner. “They are more directly affiliated with the campaign, and one is serving in government.”

“That will be up to Bob Mueller to prove [Trump Jr.’s] affiliation with the campaign,” he said.

“If Donald Trump Jr. was not a member of the campaign, did he aid and abet in the conspiracy?” Hosko said. “He could wiggle out from … being a part of the campaign or government, but he could still be part of a conspiracy.”

Liberal government watchdog groups last week filed a complaint with the Justice Department and the Federal Election Commission accusing Trump Jr., Manafort, and Kushner of illegally soliciting a campaign contribution from a foreign national. Their argument: Opposition research was something of value potentially offered by a Russian national with alleged ties to the Kremlin.

Kushner amended his Standard Form 86, required for a security clearance as a senior adviser to the president, to account for various meetings. The president’s son-in-law did not initially disclose this one, but last week included it on a supplemental form.

Details on the meeting with the Russian lawyer emerged weeks after the Justice Department named former FBI Director Robert Mueller as special counsel to investigate Russian meddling in the 2016 presidential race, including any evidence of collusion with the Trump campaign. Congressional committees also are investigating.

The president said on Twitter that his son did what anyone would do during a campaign:

Most politicians would have gone to a meeting like the one Don jr attended in order to get info on an opponent. That’s politics!

During the White House briefing Monday, White House press secretary Sean Spicer again characterized the meeting as having been thought to be part of opposition research that happens in most political campaigns.

In “the heat of a campaign,” Spicer said, people “quite often” ask about outside offers to provide negative information on an opponent.

“That’s what he simply did,” Spicer said of Trump Jr.

As it turned out, and as the president “has made clear through his tweet,” the White House press secretary added, the meeting proved to be about nothing “other than adoption.”

Kushner reportedly left the meeting early, while Manafort was preoccupied with his smartphone.

Asked about a hypothetical situation, Trump’s nominee as FBI director, Christopher Wray, said during a Senate hearing last week that he would advise those involved with a campaign to “consult with some good legal advisers” before having a meeting with a foreign national related to opposition research.

“To the members of this committee: Any threat or effort to interfere with our elections from any nation-state or nonstate actor is the kind of thing the FBI would want to know,” Wray told the Senate Judiciary Committee.

The progressive groups Common Cause, the Campaign Legal Center, and Democracy 21 filed the complaint with the Justice Department and the Federal Election Commission.

“The emails released by Donald Trump Jr. reveal, in no uncertain terms, his choice to place his blind support for his father’s candidacy before any allegiance to the nation’s security,” Karen Hobert Flynn, president of Common Cause, said in a prepared statement, adding:

Democracy is not a real estate deal or a New York solid waste pickup contract, but that is how these three Trump campaign officials treated it in agreeing to meet to accept opposition research they believed came from the Russian government. These revelations require prompt and thorough investigation by the DOJ and FEC for the good of the nation.