Trump Cancels Meeting With Putin as US, UK Back Ukraine in Wake of Russia’s Naval Attack 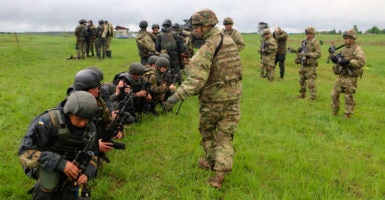 The U.S. Army has run a training program for Ukrainian soldiers at a base in western Ukraine since 2015. (Photo: Nolan Peterson/The Daily Signal)

KYIV, Ukraine—Ukraine got a valuable boost Thursday from its Western allies when ambassadors from the U.S. and Britain both condemned Russia’s seizure of three Ukrainian navy vessels and pledged their countries would do more to build up Ukraine’s naval forces.

“We call on Russia to de-escalate the tension that Russia has created,” U.S. Ambassador to Ukraine Marie Yovanovitch said in a speech before a packed hall at the International Maritime Security Conference here in Ukraine’s capital.

In a pair of tweets hours later, citing the incident, President Donald Trump said he is canceling a scheduled meeting with Russian President Vladimir Putin on the sidelines of the Group of 20 summit in Argentina.

….in Argentina with President Vladimir Putin. I look forward to a meaningful Summit again as soon as this situation is resolved!

“I look forward to a meaningful Summit again as soon as this situation is resolved!” Trump said in the tweet.

Judith Gough, the British ambassador to Ukraine, clearly denounced Russia for Sunday’s naval confrontation during her own remarks Thursday.

“We condemn Russian aggression in the Black Sea,” Gough said. “We’re absolutely clear that this is a violation of Ukraine’s sovereignty and territorial integrity.”

Russian ships fired on and captured the three Ukrainian navy vessels Sunday as they approached the Kerch Strait, a narrow waterway that connects the Black  Sea to the Sea of Azov. Russian forces reportedly took 24 Ukrainian crew members prisoner and already have tried some as criminals.

The two Ukrainian artillery boats and a tugboat were in transit from Odesa to the Ukrainian port of Mariupol on the Sea of Azov, Ukrainian agencies reported. 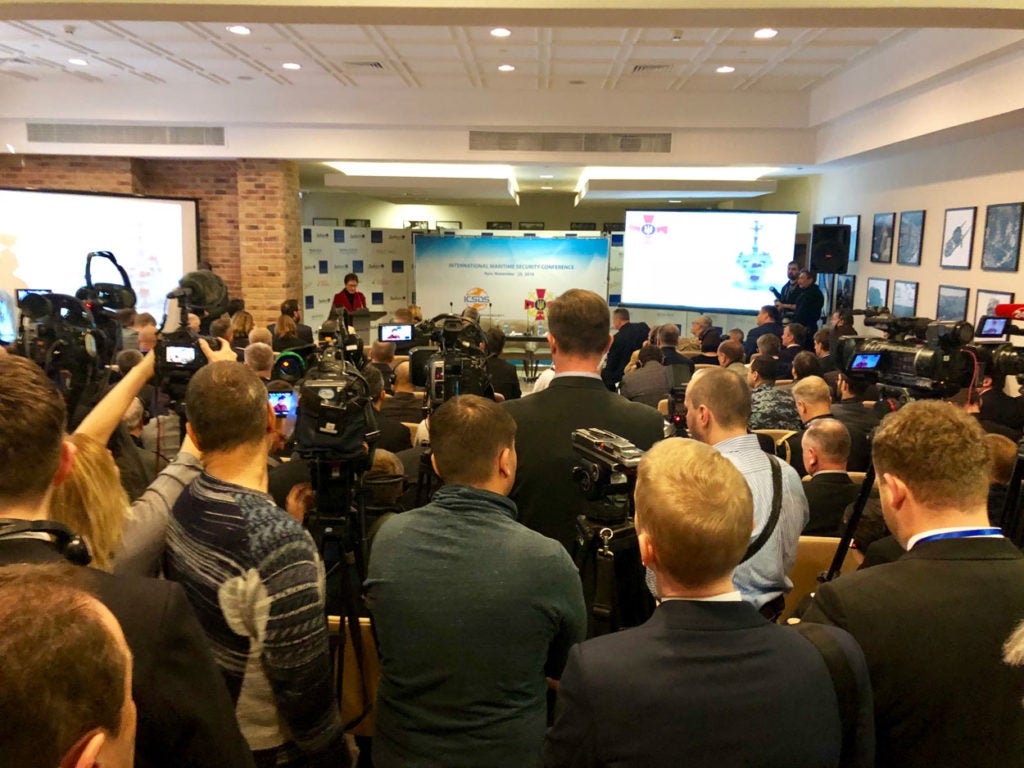 The maritime security conference Thursday had been planned for months. Its timing only days after the Black Sea confrontation, however, transformed the event into a venue for the American and British ambassadors to make diplomatic statements that surely would be heard in Moscow.

What otherwise would have been a largely academic exercise turned into a high-stakes media event.

The conference room was standing room only, packed with journalists as well as uniformed navy officers from Ukraine and NATO countries. A solid row of television cameras lined the back galley.

Before this audience, Yovanovitch called Russia’s attack on Ukrainian navy vessels a “gross violation of international law” and “a dangerous escalation.”

The United Kingdom is “committed” to the “development of Ukraine’s navy,” Gough said, adding that the Royal Navy already has pledged to deploy a ship to the Black Sea next year.

“We will continue to stand with the people of Ukraine against Russian aggression,” Yovanovitch said, adding that the U.S. is “currently examining different ways” to help Ukraine develop its navy.

For the most part, the British and American statements of support resonated among Ukraine’s soldiers and war veterans.

“Any support will be very important to us. Especially military assistance,” Andrey Kobzar, 41, a Ukrainian army combat veteran of the war in the Donbas region, told The Daily Signal.

“The events of recent days show the determination of Russia to paralyze our maritime trade,” Kobzar said. “Thus, a terrible and irreparable blow will be dealt to our economy. Without a modern fleet, the task of protecting free trade shipping cannot be solved. “

Still, some Ukrainian soldiers and veterans said the U.S. and its Western allies should do more to help Ukraine.

Vlad Gryshchenko, a senior sergeant in Ukraine’s 95th Air Assault Brigade, said Ukrainian troops deserve more support from the West because they have been on the front lines of a war that threatens all of Europe.

“We protect ourselves and Europe,” Gryshchenko said.

After four and a half years of constant combat, the artillery still thunders daily in Ukraine’s eastern Donbas region along the 250-mile-long, entrenched front lines of Europe’s only ongoing land war.

Since a shaky cease-fire, known as Minsk II, quelled the fighting in February 2015, the physical effects of the war have remained more or less geographically quarantined in embattled Donbas. For the most part, the war has been fought from trenches without the use of air or maritime forces.

Over the summer, however, Russian naval forces stepped up harassment of Ukrainian merchant vessels in the Sea of Azov, a key trade route for Ukraine. The naval confrontation Sunday effectively shattered the military stalemate.

Ukrainian officials warn that Russia’s action could be the opening salvo of an invasion, or, at a minimum, a major escalation of the ongoing military conflict. 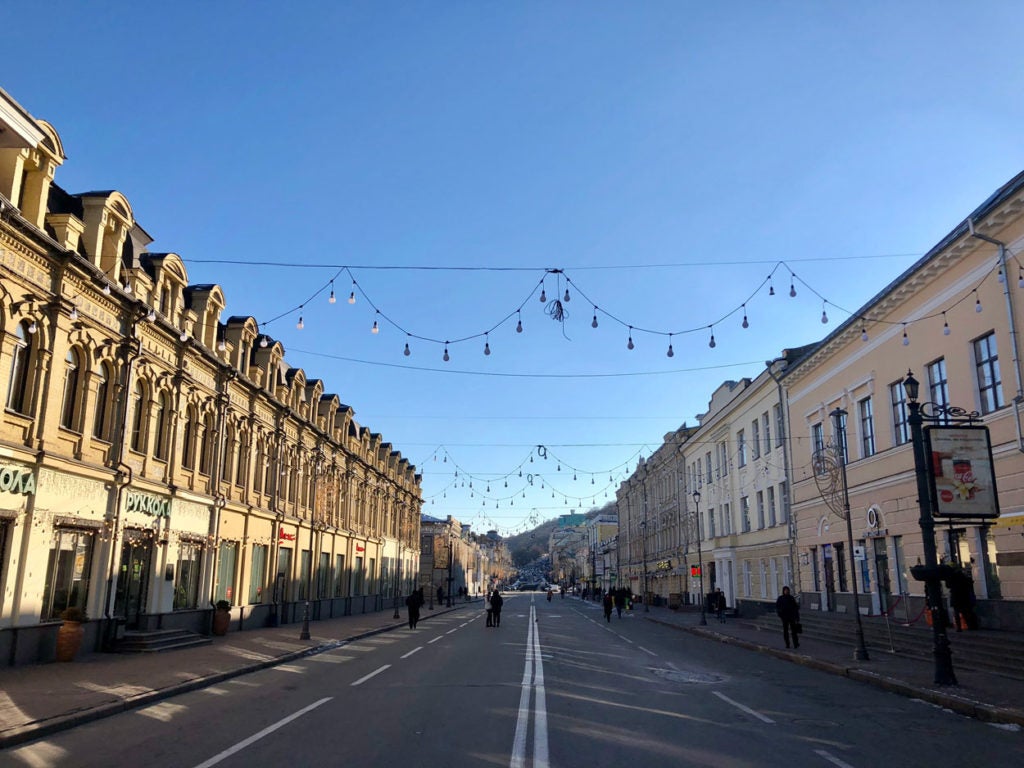 Despite the looming threat of a major escalation in the ongoing war with Russia, the mood in central Kyiv on Thursday was calm.

Amid the tensions, some Ukrainian veterans and soldiers said Western military support will need to increase to match the overall escalation of the conflict.

“Of course, the support is very important to us. But without the direct participation of NATO forces, we cannot solve the problem in the Sea of Azov and with Russia as a whole by political means,” said Alexander Levitsky, a 53-year-old Ukrainian military veteran who lives in Kyiv.

For years, the Kremlin has denied that Russian troops are operating in Ukraine under its orders, or that Russia is involved in the conflict in the Donbas. Russia has, however, been a party to negotiations for the war’s two cease-fires.

The naval confrontation, however, was the first time in four and half years of warfare that Russia publicly acknowledged firing on Ukrainians.

“On Sunday Russia crossed the threshold. Skeptics can no longer deny what we already know,” Yovanovitch said, adding that culpability for the ongoing war “can be traced straight back to Moscow.”

British military units have been in Ukraine to train the country’s armed forces since 2015. On Sept. 21, British Defense Secretary Gavin Williamson announced the U.K. would deploy more Royal Marine commandos and a naval attaché to Ukraine.

Also since 2015, the U.S. Army has run a military training program for Ukrainian forces at a base in western Ukraine.

The U.S. ramped up military support for Ukraine this year with delivery of Javelin anti-tank missiles and advanced sniper systems.

“With the help of the USA and Great Britain, the fleet of Ukraine will be the most powerful and visual evidence that in support of our struggle for freedom, we can count on the most serious and concrete help,” Kobzar, the Ukrainian war veteran, said.

Still, that ramped-up U.S. assistance remains elusive to some soldiers on the front lines.

“All help is good, of course, but I haven’t seen any for a while,” said Anton Kolomoets, a soldier in the Ukrainian National Guard’s Azov Regiment, which is deployed to defend the Sea of Azov coastline.