What Congress Can Do Now to Fix Immigration Enforcement 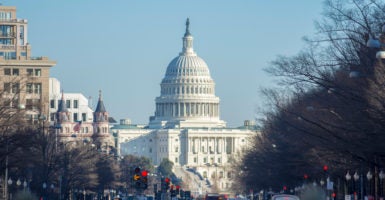 Republicans will control the House of Representatives until Jan. 3, 2019. (Photo: Tim Brown/Getty Images)

With just a month and a half remaining in the 115th Congress, members face a number of issues that require action. Immigration policy is one of those areas that will likely be a focal point of congressional debate and jockeying.

President Donald Trump is demanding funds for a border wall, and while congressional leaders have promised there will not be a government shutdown over such funding, the president has not taken this off the table.

But lawmakers should step back and consider this question: What is the most important, meaningful action they can take on immigration policy before passing the baton to a politically divided 116th Congress?

The answer is quite simple: Fix the enforcement of U.S. immigration laws.

Border security is an important part of this, but the biggest problem the U.S. faces at the border isn’t catching illegal immigrants—it’s repatriating them. Of all non-Mexican family units and children that were caught at the U.S. border in fiscal year 2017, less than 2 percent have been removed from the U.S.

And the number of those staying here is only increasing due to loopholes in our laws and a weak asylum system. Well-meaning laws like the Trafficking Victims Protection Reauthorization Act and court cases such as the Flores Settlement Agreement have limited our ability to detain and quickly remove unaccompanied alien children and those families with children—especially when they have claimed asylum. Those cases have to be adjudicated in court.

Yet despite this surge of asylum claims, fewer people have actually been granted asylum in recent years—a trend that began during the Obama years.

Today, our immigration court system is completely overwhelmed. It now takes an average of nearly two years to receive an immigration court hearing, whereas a decade ago the average wait time was just over a year.

These glaring loopholes and failures to enforce the law are unsustainable, and are only encouraging more illegal immigration. A wall cannot stop these glaring problems of enforcement.

The president recently took executive action to toughen up asylum rules, but this action will certainly be challenged in the courts and can always be undone by a future administration. Legislative reforms are needed to fix this situation in a more comprehensive and permanent manner.

Congress has a great opportunity to pursue these reforms in the lame-duck period. Two major steps in particular would have a big impact on security at the U.S. southern border:

There are multiple ways Congress could improve the asylum system. Rather than applying for asylum at the U.S. border, asylum-seekers traveling to the U.S. southern border should be required to have their asylum claims heard by a U.S. Citizenship and Immigration Services asylum officer at a U.S. consulate in Mexico.

Interviewers should also ask the asylum-seekers why they did not assert asylum in other countries, such as Mexico. If they fail to explain why, this should be considered as a factor in the decisions made by immigration officials.

Similarly, Congress could make it much harder for those crossing the border illegally to claim asylum.

The Flores settlement, reached in a federal court case in 1997, limits the length of time and the conditions under which alien children can be detained. Congress should reject this settlement in order to allow accompanied children to remain with their parents while they await adjudication of their asylum claims or prosecution for having violated immigration law.

Congress should also reform the Trafficking Victims Protection Reauthorization Act of 2008 to allow unaccompanied children from countries that are noncontiguous with the U.S. to be quickly repatriated to their home countries.

While other enforcement reforms are needed for immigration courts, Immigration and Customs Enforcement agents, and getting rid of sanctuary city policies, the above fixes to immigration loopholes would go a long way toward securing the border and stopping illegal immigration.