In a War With China, the US Could Lose 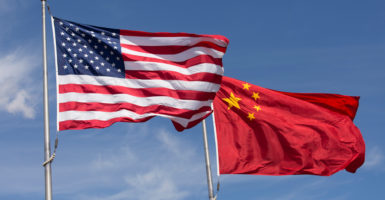 A new government report calls into question the assumption that the U.S. could secure air, maritime, and information dominance in an Asian conflict. (Photo: cbarnesphotography/Getty Images)

Two separate government commissions issued reports this week, and each highlighted the growing threat stemming from the People’s Republic of China.

The National Defense Strategy Commission is a congressionally mandated panel comprised of both Republican and Democratic officials, charged with examining the new U.S. national defense strategy, which came out in 2017.

The commission’s report did not challenge this shift in focus, but made clear that major changes and reforms are necessary if the military’s priority is to counter China and Russia.

Both Russia and China see the United States as the primary obstacle to dominating their respective regions. To this end, the commission concluded, both states are pursuing military modernization programs intended to neutralize key American advantages. This includes efforts at developing “debilitating kinetic, cyber, or other types of attacks” against not only U.S. forces, but the American homeland.

The report warns that “the U.S. military could suffer unacceptable high casualties and loss of major capital assets in its next conflict. It might struggle to win, or perhaps lose, a war against China or Russia.”

A separate body, the U.S.-China Economic and Security Review Commission, also issued a report this past week. This commission was established by Congress in 2000 and tasked to monitor the state of the U.S.-China bilateral trade and economic relationship, as well as assess the national security implications of that relationship. It provides an annual report to Congress on its findings.

The report’s very first finding, for example, is that “China’s state-led, market-distorting economic model presents a challenge to U.S. economic and national security interests.” Chinese economic policies place foreign firms at a disadvantage due to Beijing’s financial and political backing for its companies. Indeed, state influence over the economy is growing, rather than shrinking.

Meanwhile, the report concludes, the modernization of the Chinese People’s Liberation Army has increased China’s ability to militarily challenge the United States. Like the National Defense Strategy Commission report, the U.S.-China Commission report calls into question the American assumption that it could secure air, maritime, and information dominance in an Asian conflict.

Indeed, the report flatly states, “with the advances made by the [People’s Liberation Army] Air Force, the United States and its allies and partners can no longer assume achieving air superiority in an Indo-Pacific conflict.”

The report also concludes that growing U.S. reliance on China for information and communications technology, especially as it relates to the “Internet of Things,” is creating potential vulnerabilities to American critical infrastructure. In particular, the scale of Chinese state support for the creation of 5G networks and technology creates “enormous economic, security, supply chain, and data privacy risks for the United States.”

These reports independently confirm what The Heritage Foundation had separately concluded—that the U.S. military is far weaker than is commonly appreciated. As the 2019 Index of U.S. Military Strength notes, “as currently postured, the U.S. military is only marginally able to meet the demands of defending America’s vital national interests.”

All of these reports conclude that under-investment in research and development, limited innovation, and sustained engagement in the Middle East have left the United States far more vulnerable than is generally recognized, especially in the face of China and Russia’s sustained efforts to catch up.

These reports put the recent U.S.-China security and political talks in a sharper light. These talks included Secretary of State Mike Pompeo and Secretary of Defense James Mattis on the American side, and State Councilor for Foreign Affairs Yang Jiechi and Defense Minister Wei Fenghe on the Chinese side.

The talks had been delayed after the United States announced a new round of arms sales to Taiwan. The joint press conference at its conclusion suggests that the two sides remain far apart on key security issues.

Mattis, for example, reiterated that U.S. forces would fly and sail wherever international law applies. Yang retorted that “the U.S. should stop sending its vessels and aircraft close to” Chinese territory in the South China Sea.

Yang’s comments come after a Chinese destroyer approached the U.S. destroyer USS Decatur while it was undertaking freedom of navigation operations near the Spratlys Islands.

The expected meeting between Chinese President Xi Jinping and U.S. President Donald Trump at the G20 summit in Argentina at the end of November is largely expected to focus on trade differences, but could see these differences and other political/security issues raised as topics of conversation as well.