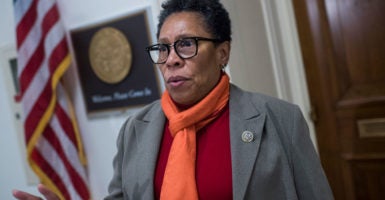 Rep. Marcia Fudge, D-Ohio, has said she is open to the idea of challenging Pelosi, who wielded the speaker’s gavel from 2007 to 2011, and hopes to again when the 116th Congress convenes in the new year.

“I’m still thinking about it,” Fudge told CNN on Thursday night, adding that she has been “overwhelmed” by the number of her fellow House Democrats who have encouraged her to run.

Leadership elections for House Democrats are slated for Nov. 29.

Pelosi met with Fudge on Friday, calling it a “a candid and respectful conversation,” CNN reported.

Fudge said that “Pelosi did not ask her specifically …  not to run,” according to CNN.

Here are five things to know about the woman who could challenge Pelosi for the speakership.

Fudge has been critical of Pelosi, saying Thursday that the California lawmaker was responsible for losing seats in the House in 2010 and thereafter.

“She didn’t do this by herself,” Fudge said, The Hill reported, referring to Democrats’ regaining control of the House in last week’s midterm elections. “She also was the person who over the last eight years lost seats. It’s one thing to give people credit for winning if you also make them responsible for losing.”

According to The Wall Street Journal, Fudge “has been in touch with a small group of incumbent lawmakers who oppose Pelosi’s leadership—not on ideological lines, but on the grounds that she has served as leader of the caucus for too long and should step aside and allow newer members to move up.”

Fudge signed on with a group of liberal Democratic colleagues who in November 2017 filed articles of impeachment against Trump.

“In the nearly 300 days since he was sworn in, it has become evident that President Trump is a clear and present danger to our democracy,” Fudge said in a statement last November.

“It is high time that Congress take a serious look at the president’s actions. If those actions are found to be in violation of the Constitution, then the Congress of the United States needs to do the job the American people elected us to do.”

“We keep talking about diversity, but there is nothing diverse about the top of our ticket,” she said. “We have to not just talk the talk, but walk the walk.”

On its face, that would seem to slight Rep. Jim Clyburn, D-S.C., who is also black. He has served as assistant Democratic leader, the No. 3 post in the House party leadership, since 2011 and before that as House majority whip.

Clyburn reportedly has secured enough votes from his fellow Democrats to take the third-ranking position in the House when the party takes over Jan. 3.

“I stand [with] Hillary because she understands America is only as strong as its people,” Fudge tweeted in February 2016. “She has been advocating for the [African-American] community for years.”