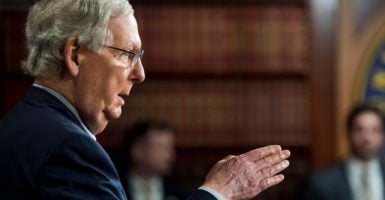 The 2018 election results are encouraging, if for no other reason than that more progress can be made in filling judicial vacancies.

First, a snapshot of where things stand right now.

President Donald Trump has made almost 40 percent more nominations to life-tenured positions than the average for his five predecessors of both parties at this point. The pace of the Senate Judiciary Committee’s hearings for judicial nominees is also way ahead of the usual pace.

The Senate’s record for confirming those nominees, however, is not as robust. Previous posts (see here, here, and here) have detailed the strategies by Senate Democrats to make the confirmation process cumbersome rather than efficient.

The Senate has confirmed 84 judges, or 54 percent of his nominees, so far in the 115th Congress. That compares to an average of 73 percent of the nominees confirmed at this point for Presidents Ronald Reagan to Barack Obama.

But the Senate has a great opportunity to help alleviate this grave situation.

The Judiciary Committee has already approved 32 judicial nominees, which today wait for a vote by the full Senate. Sixteen more have had a hearing and need only a committee vote to join that list.

Confirming those would bring the total confirmation rate to 85 percent of Trump’s nominees—still below Clinton’s 95 percent at this point, but on a par with Clinton in the percentage of the judiciary he had appointed during their respective first two years in office.

The 2018 election provides even more hope. Expanding the Republican majority in the Senate may also improve their majority on the Judiciary Committee, with more flexibility in achieving and maintaining the quorum needed to do business. And thanks to Democrats in 2013, ending debate on nominations now requires only a simple majority.

More than half of his nominees have faced various levels of Democratic opposition on the Senate floor, compared to an average of just 8 percent of the previous five presidents’ nominees facing any opposition. Of the 1,458 total votes cast on the Senate floor against Trump judicial nominees, only two came from Republicans.

Even if Democrats continue their blindly partisan approach, a larger Republican majority will ensure that Trump’s qualified judges will continue to be approved.

The 2018 election result may affect the confirmation process in another way. Different parties controlling the Senate and House decreases the likelihood of significant or comprehensive legislation on any subject. While that is not a positive prospect, at least on issues that genuinely need sound legislation, it means there will be less competition for the Senate’s attention.

The Democrats’ strategy of making each step of the confirmation process as time-consuming as possible is more effective when floor time is scarce. More floor time available for confirmations can neutralize that strategy.

Obama spent eight years appointing judges who have departed radically from the defined, modest role that America’s Founders designed for the judiciary. Trump is steadily putting the judiciary back on course by consistently appointing judges who know their proper place in our system of government and who will be impartial, rather than political, in how they decide cases.

The Senate can still make progress toward that goal in the remaining days of the 115th Congress, and the 2018 election expands the opportunity for improving the judiciary in the next two years.