Democrat Obstruction in the Senate Is Hurting Our Courts 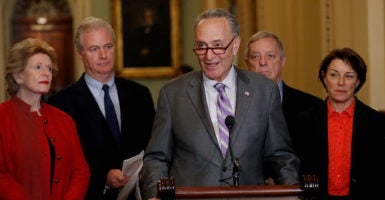 Senate Minority Leader Chuck Schumer, D-N.Y., speaks to members of the media with other Democrats during a news conference at the U.S. Capitol May 22. (Photo: Leah Millis/Reuters/Newscom

Our federal courts are facing a vacancy crisis like never before.

The number of judicial vacancies across the federal bench has averaged 142 so far this year. The only year that came close to this was 1991, which had an average of 138 vacancies—but that was shortly after Congress created 85 new judicial positions.

More than half of the current vacancies are designated as “judicial emergencies” by the Administrative Office of the U.S. Courts because those seats have been open so long and they significantly impact the caseloads of other judges. This is a real vacancy crisis.

As of May 30, 39 nominees to the U.S. district courts and U.S. courts of appeal were pending before the full Senate after being approved by the Judiciary Committee. More than half of these nominees are slated to fill judicial emergency vacancies.

With so many vacancies, you might ask, why doesn’t the Senate just approve these pending nominees?

The confirmation process has two speeds: normal and slog. Not “slow,” but “slog.” This is the speed that results when the minority party uses various tactics to intentionally make the process as cumbersome and time-consuming as possible. It’s like trying to walk through molasses.

The confirmation process has been a slog almost since President Donald Trump took office. One of the tactics that Democrats are using is to force the Senate to take two separate votes on every nomination: one to end debate, and one to confirm.

Democrats have forced double votes on 95 percent of Trump’s judicial nominees so far. That’s compared to 8 percent of President Barack Obama’s nominees at this point, and a flat zero for Presidents George W. Bush, Bill Clinton, George H.W. Bush, Ronald Reagan, and Jimmy Carter. You could keep going back and the result would be the same.

This one tactic is a drag on the confirmation process in four ways.

First, since the number of votes needed to end debate and to confirm are the same, there is no reason to take any votes to end debate. Second, the Senate has to wait two days to vote on ending debate after a vote is requested. Third, even after the Senate votes to end debate, there can be up to 30 more hours of consideration. And fourth, Democrats are forcing the Senate to jump through these hoops for nominees who have no opposition at all, and for more than a half-dozen originally nominated by Obama.

Why is this such a big deal? A roll call vote requires every senator to come to the Senate floor and takes an average of about 35 minutes. The normal way of approving nominations was by unanimous consent or a voice vote, which did not require the presence of every senator and could take about 35 seconds. It all adds up.

The bottom line is that nominations that used to be confirmed in a matter of hours now can take a week or more. When the confirmation process is at slog speed, it displaces much more of the Senate’s business and presents much more challenging choices for the majority leader.

Democrats have slowed the confirmation process to a slog because they can, but it’s taking a serious toll on the judiciary. Vacancies are now more than 30 percent higher than when Trump took office, and at the level they are today, the American people who must bring matters to the courts are getting shortchanged.