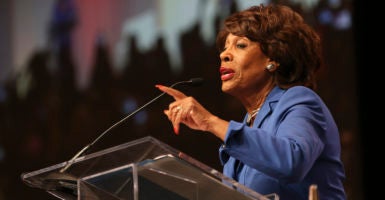 Rep. Maxine Waters, D-Calif., speaks at the Women’s Convention at Cobo Center in Detroit on Oct. 28, 2017. Waters has been one of the biggest cheerleaders for impeaching President Donald Trump. (Photo: Chirag Wakaskar/Polaris /Newscom)

A new Democratic House majority, now predicted to occur by NBC News and Fox, could be poised for impeaching President Donald Trump, many experts say.

Special counsel Robert Mueller reportedly is set to release a report shortly after the midterm elections regarding whether the 2016 Trump presidential campaign colluded with Russians to affect the outcome of the vote, and whether Trump may have obstructed justice.

But, being in the minority party, many of the most liberal Democratic members didn’t want to wait for the prosecutor to reach any public conclusion.

Rep. Maxine Waters, D-Calif., has been leading the charge, while 53 House Democrats voted to bring an impeachment resolution to the House floor. The resolution was sponsored by Reps. Brad Sherman, D-Calif., and Al Green, D-Texas.

“Democrats will work to impeach Trump and will very likely move immediately for impeachment,” Jenny Beth Martin, president of the Tea Party Patriots, told The Daily Signal. “They will risk angering their own base if they don’t.”

However, talk is cheap for a minority party, said Quentin Kidd, director of Wason Center for Public Policy at Christopher Newport University.

“I’d be surprised, stunned, if impeachment proceedings go very far, absent a report from Mueller,” Kidd told The Daily Signal. “There are voices in the Democratic caucus demanding this now. But it’s easier to be loud in opposition. It’s another thing to be in control.”

“Democrats know they can say a lot of things when Republicans are holding them back,” Kidd continued. “Once they are in control of Congress, they can’t be as loud about doing certain things.”

It only takes a majority in the House to impeach a president, but it requires a two-thirds Senate supermajority vote to remove a president from office. So, a House impeachment vote can be partisan, but it would require a broad bipartisan vote for the Senate to oust the chief executive.

“A Democratic majority will be beholden to their base and their donors that want Trump impeached,” Sam Nunberg, a former 2016 Trump campaign adviser, told The Daily Signal.

The demands of the party base will likely be enough to make the party move, said Gary Rose, chairman of the political science department at Sacred Heart University in Fairfield, Connecticut.

“It doesn’t matter the margin. A Democratic House majority will hear the drumbeat for impeachment,” Rose told The Daily Signal. “Treason and bribery are difficult to nail down, but ‘high crimes and misdemeanors’ are wide open.”

Rose noted that many Democratic candidates campaigned for impeachment, but House Minority Leader Nancy Pelosi, D-Calif., has resisted her party’s progressive wing—at least during the campaign.

“To keep her speakership, she may get absorbed into it,” Rose said. “They wouldn’t have the numbers to convict in the Senate, but enough Democrats would want to impeach Trump in the House just to stain him for 2020.”

Only twice before has the House of Representatives voted to impeach a president: first, in 1868 against President Andrew Jackson, and in 1998 against President Bill Clinton. In both cases, the Senate failed to achieve a supermajority vote to oust them.