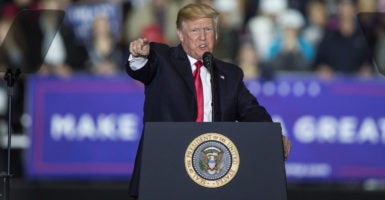 President Donald Trump has been a frequent critic of the media. A recently released poll shows that a majority of Americans also have a negative view of the media. (Photo: Junfu Han/TNS/Newscom)

Americans aren’t fans of their media.

A recent poll shows that while many Americans find President Donald Trump divisive, even more find the media to be divisive.

Only 17 percent of respondents said that they thought the national media has done more to unite the country.

There were sharp partisan divisions over whether Trump has worked to unite or divide the country, but Americans across the political spectrum gave the media low marks.

Reinforcing this poll about the media is another survey by Media Research Center, a conservative media watchdog, that says media coverage of Trump and Republicans has been overwhelmingly negative and partisan.

The study found that 92 percent of the broadcast network coverage of Trump was negative, compared to only 8 percent being positive.

While much of the division in America may be natural and intractable, it is telling that the media, which has been so strongly negative toward the president, is being blamed even more for heightening conflict in this country.

If anything, the polls show that the media needs to examine themselves before labeling Trump as the cause of a climate of hate in this country. Perhaps there is much blame to go around, but it’s clear that the media has been a driver of this toxic environment.

There’s perhaps no better example of this than recent comments by CNN anchor Don Lemon to CNN host Chris Cuomo on Monday.

It’s no wonder that polls show eroding confidence in the media as a whole. Some of the biggest personalities in news have revealed themselves as hopelessly partisan and vindictive toward wide swaths of ordinary Americans.

The people have noticed, and their faith in the fourth estate is waning.

As Philip Klein of the Washington Examiner wrote, this perhaps explains why Trump’s attacks on the media have been so effective. Trump’s rhetoric, Klein wrote, “not only works as a way of firing up the base, but it doesn’t really cost him much among the general public, which is sympathetic to the idea that journalists play a large role in dividing the country.”

Lack of trust in media predates the Trump administration, but as I wrote in October, it’s worse now. Polls show that Americans think the media intentionally publishes fake or misleading news—particularly about Trump.

During the hearings for Brett Kavanaugh, in which allegations of sexual assault were lobbed at the now-Supreme Court justice, the media was in rare form, publishing numerous, poorly sourced stories that seemed timed for maximum damage.

Then, as soon as the Senate confirmed Kavanaugh, the media stopped pursuing the story altogether, suggesting that it was part of an agenda rather than the pursuit of the truth.

So, despite the fact that there are still excellent journalists at the local and even national level—and despite the genuine need for a serious press to keep people in power honest—many Americans are outright hostile to what the media has become. And this lack of faith in the media will not be repaired by a media establishment that sees itself as the resistance to Trump and the sole bearer of the truth.

Perhaps the solution is to get back to listening to the American people, and to accept that some of Trump and others’ criticism of the media rings true for large swaths of the population.