Media Should Examine Itself Before Blaming Trump for ‘Climate of Hate’ 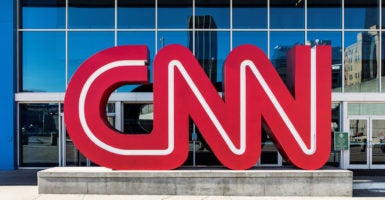 A commentator and an anchor at CNN were quick to blame President Donald Trump and conservatives for creating a climate of hate after an attack on a Jewish synagogue. (Photo: John Greim John Greim Photography/Newscom)

Members of the media and their allies on the left should look in the mirror—or at least take a moment for the country to mourn tragedy—before blaming violence and incivility on President Donald Trump and conservatives in general.

They certainly haven’t done that in the last few weeks.

First, authorities arrested a seemingly disturbed man in connection to pipe bombs that were mailed to CNN and prominent Democratic politicians.

Then, last weekend, a Jewish congregation was attacked by a raving anti-Semite, who killed 11 people and wounded six others before police apprehended him.

The media was quick to blame these incidents on the president, saying that he has created a climate of hate and fear that is producing these kinds of incidents.

Progressive columnist Paul Krugman wrote in The New York Times: “All of these hate crimes seem clearly linked to the climate of paranoia and racism deliberately fostered by Donald Trump and his allies in Congress and the media.”

He then blamed “hate peddling” on “one side of the political spectrum,” meaning conservatives.

Krugman was hardly alone in making this point, and a few in the media made claims that are even more absurd.

“I think this president, one of the things that he really launched his presidential run on is talking about Islamic radicalization. And this president has radicalized so many more people than ISIS ever did,” Ioffe said in a segment on CNN.

On CNN, @juliaioffe just said "this president has radicalized so many more people than ISIS ever did.”

Ioffe later apologized, but then went right back to blaming the Trump administration for anti-Semitic attacks.

I clarified and apologized on air, but I’ll say it again here. This has been a very emotional and painful time, but I absolutely should not have gone with such hyperbole on the air. I apologize.

Yet, after all these accusations that conservatives are to blame for violence in America, the media suddenly clams up when a hate-filled person on the left engages in violence.

In an appearance on “Fox & Friends,” Sen. Rand Paul, R-Ky., said that the shooter shouted, “This is for health care!” as he opened fire, a fact that received little media attention.

Of course, progressives in the media have been unwilling to make a connection between this shooter and Sanders and his left-wing advocates.

CNN host Don Lemon appeared offended that a guest on his show even brought this up, and then replied, “You don’t see Democrats killing people.”

And the Scalise shooting was hardly the only attack on Republican politicians and Trump administration officials.

Alas, the media ensures that prominent members of the left never have to account for what they say—or don’t say.

Perhaps this explains why many of Trump’s supporters continue to back him so strongly.

Vicious and hateful attacks on Republican presidents and conservatives go back for years, as do excuses for open anti-Semites in left-wing ranks—but Trump has been far more effective at cutting through media attacks and turning them back on his political opponents.

One shouldn’t forget that while former President George W. Bush rarely, if ever, lambasted the media, he was relentlessly blasted for “lying” to get the United States into the Iraq War, labeled an enemy of the media, and frequently compared to Hitler, among numerous other attacks.

Instead of again using a tragedy as a bludgeon against their political opponents, the media should consider their own real power to lower the temperature of our national discourse, to stem the “climate of hate.”

They have considerable power to do just that—but I’m not holding my breath.