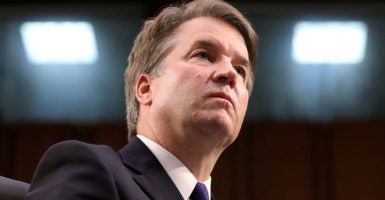 The media has had many notable misses in the coverage of the allegations against President Donald Trump's Supreme Court nominee, Brett Kavanaugh. (Photo: Chris Wattie/Reuters/Newscom)

The last few weeks of coverage of the accusations against Supreme Court nominee Brett Kavanaugh have been a perfect example of why the American people don’t trust the media.

The sheer breadth of wild and reckless reporting on the situation has been extraordinary, even by the media’s increasingly low standards.

There have been a staggering number of backtracks and incidences of simply false reporting.

NBC published a social media post by one of Ford’’s classmates, Christina King Miranda, saying: “This incident did happen. Many of us heard a buzz about it indirectly with few specific details. However Christine’s vivid recollection should be more than enough for us to truly, deeply know that the accusation is true.”

NBC’s post went viral, but very quickly thereafter, the classmate deleted her post and admitted to not knowing what took place between Kavanaugh and the accuser.

“In my [Facebook] post, I was empowered and I was sure it probably did [happen],” Miranda said, according to NPR. “I had no idea that I would now have to go to the specifics and defend it before 50 cable channels and have my face spread all over MSNBC news and Twitter.”

NBC later had to revise the story.

The New York Times made its own mess. On Monday, the Times reported that Mark Judge, the second man named in Christine Blasey Ford’s allegations against Kavanaugh, had confirmed to the Senate Judiciary Committee that he did recall the episode. But the potentially damning statement was completely incorrect.

Judge has repeatedly claimed, via his lawyer, that he has no recollection of such actions ever taking place.

“Brett Kavanaugh and I were friends in high school but I do not recall the party described in Dr. Ford’s letter. More to the point, I never saw Brett act in the manner Dr. Ford describes,” Judge said in a statement.

The New York Times was forced to backtrack: “An earlier version of this article misstated what Mark Judge told the Senate Judiciary Committee. He said that he does not remember the episode, not that he does.”

Adding to injury, three different outlets framed a joke that Kavanaugh made three years ago as being a subtle admittance to Ford’s allegations.

Speaking to a public forum at Columbus Law School, he said, “what happens at Georgetown Prep, stays at Georgetown Prep.” When watched in its entirety, it is abundantly clear that Kavanagh is completely joking. It was the dean of the school that reminded him of the phrase.

But that didn’t matter. MSNBC, CNN, and Politico presented the clip as somehow evidence that Kavanaugh is guilty or hiding something egregious. That’s three networks who chose to ignore a critical statement made by Kavanaugh to a laughing crowd—that the dean “reminded him to say that.” It was a blatant joke.

Sen. Elizabeth Warren, D-Mass., then referenced the clip in a tweet that currently has nearly 50,000 “likes” on Twitter.

“I can’t imagine any parent accepting this view. Is this really what America wants in its next Supreme Court Justice?”

I can't imagine any parent accepting this view. Is this really what America wants in its next Supreme Court Justice? pic.twitter.com/WhL8YeZQ78

These are just a few examples of the bad reporting in the last week.

Conversely, prominent members of the media lashed out at those who wanted to find the truth about the claims of the accuser, despite the fact that her claims are incredibly vague.

It’s all been a ridiculous fiasco, but this should be a lesson to those who worry that President Donald Trump’s rhetoric about the media is undermining the free press.

It’s the press that’s undermining itself by being so one-sided, so quick to publish damaging stories about conservatives—while holding fire on progressives—and bypassing the due diligence required for accurate and honest reporting that Americans should expect.

The Founding Fathers understood that a free press was vital to preserving liberty and keeping the powerful in check. They also acknowledged that the press itself was a powerful tool and that it could be used to disseminate lies and falsehoods.

The Founders, thankfully, protected press freedom through the First Amendment, as lies by the media would only be made worse by allowing the government to control the flow of information in society.

But the Founders didn’t protect the media because they wanted to empower falsehoods. They did so in order to preserve truth.

Many Americans have judged that modern media have not exactly been truthful with them, and that perception is wrecking the press’ credibility.

Some in the media, such as NBC’s Chuck Todd, have blamed conservatives, Republicans, and Trump for the poor reputation of their industry, claiming that the climate of distrust regarding the press is merely the result of their ferocious critics. “The conservative echo chamber created that environment,” Todd said on “Meet the Press.”

With the way the Kavanaugh allegations have been treated, no wonder huge segments of Americans are angry and frustrated.

The legacy media’s failure to acknowledge that the fault is not in their stars but themselves means that trust in the fourth estate will continue to erode, and they will get blistered with criticism that sticks.

In America, we have a free press, but the American people have free minds to judge truth and distortion.

The media’s role in the Kavanaugh controversy further erodes any chance the press has to regain the people’s trust. If anything, it should make us grateful for an alternative media that continues to call them out.

This story has been corrected to reflect that the NBC report was on a classmate of Ford’s.