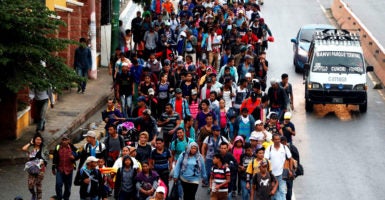 A Honduran migrant caravan heading to the United States border has sparked a debate over border enforcement. (Photo: Esteban Biba/EFE/Newscom)

It wasn’t long ago that both sides of the aisle believed America’s border laws should be enforced.

As President Donald Trump pointed out on Twitter, even former President Barack Obama, at least rhetorically, said that illegal immigrants couldn’t be let into the country en masse and without restrictions. (He said that as a senator.)

I agree with President Obama 100%! pic.twitter.com/PI3aW1Zh5Q

“We simply cannot allow people to pour into the United States undetected, undocumented, unchecked and circumventing the line of people who are waiting patiently, diligently, and lawfully to become immigrants into this country,” Obama said.

This dynamic has dramatically shifted, as the American left now increasingly sees any level of border enforcement as beyond the pale.

The migrant caravans originating in Honduras and heading north to the U.S. border are testing just how far the left will go in embracing this new narrative.

The position Obama held just over a decade ago is now considered offensive in some circles. Some are even demanding that the U.S. let the caravan into the United States.

“Every one of these people are coming from a real fear. These are refugees,” Cambridge, Massachusetts Mayor Marc McGovern said, according to the Boston Herald. “These are people who really are facing real problems and we have to let them through.”

The left is sending a message that concern over unchecked immigration is illegitimate.

Yet this is out of step with the American people in general.

Americans are clearly divided when it comes to the issue of immigration. Some want more high-skilled immigrants, others don’t. Some think a wall is necessary for border security, others don’t.

But one thing that Americans tend to agree on, strongly, is the idea that we have a right to control our border and determine who comes into the country. This belief flows from the concept that we are a sovereign nation that must maintain law and order for the safety of everyone.

The idea that thousands of people can just arrive at the border, demand entrance to the United States, and possibly force their way in by overwhelming U.S. authorities offends our idea that America is a nation of laws, and it undermines the idea that the American people have the right to set their own immigration policies.

America has very specific laws regarding legal immigration and asylum—which generally only applies in cases of state-based repression. Allowing a gaggle of thousands of people into this country with little oversight and little legal standing would only encourage more of this sort of tactic.

This worry is fueled by an increasingly aggressive left-wing stance that any level of border enforcement is tantamount to racism and nativism. This view is no longer held by just a few radicals. It is increasingly the stance of more mainstream progressives and Democrats.

Earlier this year, the call to abolish U.S. Immigration and Customs Enforcement, or ICE, morphed into a mainstream movement embraced by prominent Democrats like Sen. Elizabeth Warren, D-Mass., and Sen. Kirsten Gillibrand, D-N.Y.

One can see how this public position actually encourages more illegal immigration, including the massive caravans.

As The Heritage Foundation’s senior policy analyst for Latin America, Ana Quintana, noted, many of these migrants have been manipulated by South American left-wing parties into believing this is their path to the United States.

It’s a political tactic used to sow chaos, and unfortunately puts lives at risk—including the migrants who travel thousands of miles through dangerous locations to get to the U.S. border.

“This caravan antic is right out of the left’s disorder and chaos playbook,” Quintana wrote. “The timing before the U.S.’s midterm elections and the change of presidency in Mexico is not coincidental. It is also clear the caravan organizers are more interested in creating turmoil than the well-being of the migrants.”

We are paying the price of the world believing we won’t enforce our border laws.

The issue now at stake with the caravan is not merely immigration, but whether the United States is in fact a sovereign country—whether the American people have the power to decide their immigration laws, and whether our government will enforce those decisions.

All of this shows just how far progressives have moved away from the mainstream when it comes to immigration.