Asylum Laws Must Remain Focused on the Persecuted 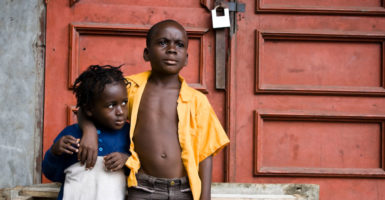 The Justice Department ruled on Monday that being the victim of gang violence or domestic abuse is not grounds for receiving asylum in the United States. (Photo: MShep2/Getty Images)

Asylum has been in the news a good deal lately, most recently with Attorney General Jeff Sessions’ decision on Monday to restrict domestic and gang violence victims from receiving asylum in the U.S.

While the decision has been attacked by various immigrant groups, a closer look at U.S. asylum law indicates this limitation was necessary to preserve our existing asylum and immigration laws.

According to the Department of Homeland Security, asylum seekers must meet the same criteria as refugees—they must be “unable or unwilling to return to his or her country of nationality because of persecution or a well-founded fear of persecution on account of race, religion, nationality, membership in a particular social group, or political opinion.”

As a result, asylum is not open simply to anyone who is a victim of violence or coercion, but rather to victims of violence that is generally state-led or sponsored and that specifically targets members of a discrete group.

For example, a shop owner who is forced to pay protection money to the local mafia has been threatened with real violence. But the reason she was threatened was because the mafia wanted money from and power over her and many other people in the town. In other words, she was not targeted because of her political party of choice, her race, or her religion.

Asylum and refugee laws and international agreements were written this way because they were not designed to address all examples of violence that could occur within a society. Instead, asylum and refugee laws offer help to those who are specifically targeted for their beliefs or core characteristics.

This brings us back to Sessions’ decision to exclude the victims of gang and domestic violence from asylum. No one doubts that gang violence in Latin America is severe and has destroyed thousands of lives, while negatively impacting the entire region. Similarly, crimes of domestic and spousal violence and abuse are horrendous travesties where victims are harmed by those who should protect and love them.

But violence alone, no matter how terrible and sad, is not grounds for asylum. In this case, victims of gang and domestic violence are victims of violence, yes, but that violence is not generally state-sponsored persecution based on their social group, as specified by U.S. law.

To fit these victims of violence into the asylum category, the immigration courts—which the Department of Justice runs separately from U.S. criminal and appeals courts—have been expanding the kinds of people who can qualify for asylum status by applying increasingly tenuous characteristics such as “membership in a social group.”

According to this logic, married women can be defined as their own social group, and then the argument can be made that crimes by private individuals against others (who happen to be women) must have been on account of their social group.

Similarly, the logic suggests that anyone living near an active gang counts as a social group, and anyone who is the victim of gang violence must have been victimized based on this social group.

These examples demolish nearly any restriction on who can claim asylum, and in fact obliterate the original meaning of asylum and the purpose of asylum laws.

Not only does this reasoning ignore the actual laws and agreements officially on the books, but its effect has been to encourage asylum-seeking, such that the number of asylum seekers has dramatically increased in recent years.

The U.S. should and proudly does help those who are persecuted, but the U.S. is not and cannot be responsible for every victim of crime everywhere in the world.

By restricting asylum laws to those who fully fit the criteria, Sessions is ensuring these laws fully protect the persecuted, while also upholding the immigration system as a whole.