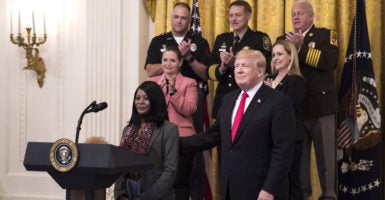 President Donald Trump flanks DeeDee Wheeler, who overcame a drug addiction, as she speaks during an event on the opioid crisis Wednesday at the White House. (Photo: Kevin Dietsch/UPI/Newscom)

President Donald Trump on Wednesday signed bipartisan legislation to combat opioid abuse and highlighted the progress made so far in the fight.

“Together, we will defeat this epidemic—it’s a true epidemic—as one people, one family, and one magnificent nation under God,” he said.

Trump secured $6 billion in federal funding to fight the problem—the most ever, he said.

The stepped-up effort comes as deaths from opioids reached 72,000 in the United States alone in 2017.

“Today, we are here to update the American people on the historic action we have taken and to sign landmark legislation to defeat the opioid epidemic,” the president said. “We are going to end the scourge of drug addiction in America. We are going to end it, or we are going to at least make an extremely big dent in this terrible, terrible problem.”

Trump signed the bipartisan SUPPORT for Patients and Communities Act, which passed the Senate this month on a vote of 98-1. The package of opioid-related measures expands access to substance-abuse care and improves oversight of opioid prescriptions.

SUPPORT is an acronym for Substance Use-Disorder Prevention that Promotes Opioid Recovery and Treatment.

Among other things, the bill requires the U.S. Postal Service to share advanced electronic data with law enforcement on 100 percent of international packages entering the country to catch deadly fentanyl entering the country from China and Mexico. It also provides services for those recovering from addiction to transition from treatment programs to the workforce.

The measure also requires Medicare to pay for medication-assisted treatment. Currently, most Medicare beneficiaries must pay out of pocket for opioid treatment programs.

“This is widespread. The opioid crisis does not discriminate on the basis of race, gender or socioeconomic status,” Kellyanne Conway, counselor to the president, told The Daily Signal in a conference call ahead of the bill-signing event. “We have an overwhelmingly bipartisan response. It’s a broad crisis in scope, so the response is broad.”

She also noted that first-time opioid prescriptions have declined.

Conway discussed a “whole-of-government approach” and also praised the private sector for stepping up.

“Major pharmacies are expanding prescription disposal,” she said, later adding, “Large corporations are not firing employees, but they’re keeping them and putting them in treatment.”

To begin the event, first lady Melania Trump said her “Be Best” children’s initiative would be recognizing effective treatment programs across the country. She said she was “proud” of her husband and his administration for taking on the problem.

Among the anti-opioid addiction initiatives will be public service announcements, the president said.

The annual death toll from opioids now reportedly outpaces the number of deaths from the height of the AIDS epidemic in the 1980s.

Fentanyl has become the biggest problem. Of the 72,000 opioid-related deaths in 2017, 30,000 resulted from fentanyl, according to the White House.

Fentanyl is a medication used for severe, ongoing pain, such as from cancer, and it has a high risk of addiction and dependence.

In addition to potentially being fatal, fentanyl can cause respiratory distress and damage organs when taken in high doses or when combined with other substances.

Last week, a dealer was arrested for selling the deadly drug near a Florida high school, while enough fentanyl for 1 million doses was seized in a suitcase at Nashville International Airport.

During the White House event, Trump recognized the Border Patrol, as well as Immigration and Customs Enforcement, for tackling the crisis.

Last year, ICE apprehended more than 76,000 people for offenses involving dangerous drugs, according to the White House. Agents seized more than 980,000 pounds of narcotics, including 2,370 pounds of fentanyl and 6,967 pounds of heroin.

Last month, the Trump administration awarded more than $1 billion in federal funding to state and local entities to address the opioid crisis, including more than $396 million to 1,232 community health centers, more than 120 rural community organizations, and academic institutions.

The Trump administration almost doubled funding for opioid and pain research to $1.1 billion and is supporting research for a vaccine to prevent opioid addiction.