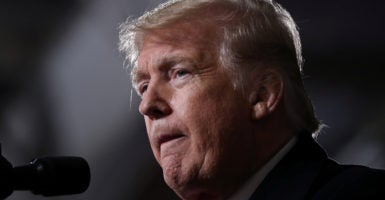 NBC News issued a correction Sunday of its reporting on President Donald Trump’s comments about Civil War generals, acknowledging that the president did not describe Confederate Gen. Robert E. Lee as “incredible.”

NBC News did not include Trump’s comments in full when it incorrectly reported that the president called Lee “incredible” during a speech Friday in Ohio. The president’s full remarks make clear that he was calling Union Gen. Ulysses S. Grant incredible, not Lee.

CORRECTION: An earlier tweet misidentified the general President Trump described as "incredible" at a rally in Ohio. It was Gen. Ulysses S. Grant, not Gen. Robert E. Lee. An attached video clip lacked the full context for Trump's remark. Here is the full clip. pic.twitter.com/NZHj3Q2dHL

Trump then added of Ohio and the Civil War:

It also gave you a general who was incredible. He drank a little bit too much. You know who I’m talking about, right? So Robert E. Lee was a great general. And Abraham Lincoln developed a phobia. He couldn’t beat Robert E. Lee. …

They said, ‘Don’t take him; he’s got a drinking problem.’ And Lincoln said, ‘I don’t care what problem he has. You guys aren’t winning.’ And his name was Grant, General Grant.

Trump’s “incredible” comment was in clear reference to Grant, the Ohio native who later became president and was known for his battles with alcoholism.

NBC’s correction came after Trump skewered the network Sunday morning on Twitter for distorting his speech:

NBC News has totally and purposely changed the point and meaning of my story about General Robert E Lee and General Ulysses Grant. Was actually a shoutout to warrior Grant and the great state in which he was born. As usual, dishonest reporting. Even mainstream media embarrassed!