The Dangerous Consequences of Calling Sovereignty and Patriotism ‘Dog Whistles’ 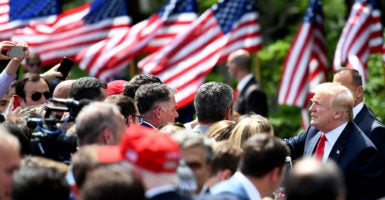 President Donald Trump has made patriotism a highlight of his message to the American people. However, one Washington Post editor called it a "dog whistle" for nativism. (Photo: Abaca Press/Douliery Olivier/Abaca/Sipa)USA/Newscom

“America is governed by Americans. We reject the ideology of globalism, and we embrace the doctrine of patriotism,” Trump said during the speech.

Chilling to hear Trump use “sovereignty” and “patriotism” as dogwhistles in his #UNGA speech.

Gives rhetorical ammunition for the nationalistic parties around the world who want to keep immigrants and refugees out.

It’s incredible to see these once unchallenged concepts, embraced by Americans across the political spectrum, now turned into something ugly and worthy of condemnation.

In many ways, the protection of our liberty stems from national sovereignty, a fact boldly stated in the Declaration of Independence. The just powers of government derive from the “consent of the governed,” not a vague global system.

“We the people of the United States” is more than a slogan. It defines the American way of life, declaring that the people are sovereign as a national unit, under a federal system.

In America, the people rule. If not, then who? Kings? Limitless international bodies?

To denounce the idea of sovereignty is to attack America as she has always understood herself—certainly, the constitutional government that has provided the basis for our liberty for over two centuries.

The very fact that concepts like sovereignty and patriotism are no longer universally accepted shows the current challenge placed before Americans and other peoples in 2018.

As our national identity and attachment breaks down, what is left in its wake?

Being a “citizen of the world” will never suffice. Placing power in the hands of an international elite is hardly conducive to upholding the interests and the rights of the people, no matter what nation they live in.

As President Theodore Roosevelt noted in his famous “Man in the Arena” speech, citizens of the world hardly make good citizens and neighbors.

“The man who says that he does not care to be a citizen of any one country, because he is the citizen of the world, is in fact usually an exceedingly undesirable citizen of whatever corner of the world he happens at the moment to be in,” Roosevelt said.

The loss of patriotism and national sovereignty hardly leads to a free and peaceful brotherhood of man. Instead it leaves a void, a lack of attachment that leads to unseemly or tyrannical ends.

Identity politics emerges from this void. People rally to their ethnic tribe rather than their country or their unique political and historical traditions.

It’s no wonder we’ve seen the rise of the hard left and the alt-right, who both feed off of the breakdown of genuine patriotism.

If we want to make sure that America remains a great and united country in the future, we must do a better job of defending our way of life, as Trump did in his U.N. speech.

This starts by doing a better job of educating young people about what our country is about and defending the foundational ideas that made America great to begin with.

Informed patriotism is what we want, as President Ronald Reagan said in his farewell address to the nation.

Conservatives must do a better job of taking up Reagan’s call to pass on the ideas and cultural inheritance of our civilization. They are daily under attack, both figuratively and literally, and they offer a better way forward than yet another version of tribalistic identity politics.

In the last half-century, we’ve seen a concerted effort by the left to appropriate American cultural and education institutions. But as the American elite turned to the ethos of postmodernism, multiculturalism, and hyphenated Americanism, the path was paved for identity politics to spiral out of control.

To avoid nativism and ethno-nationalism—a philosophical dead end for a country like the United States, which has blended cultures and ethnicities since the time of its founding—we must commit ourselves to Americanism, to patriotism.

This is especially important in an age of atomism when an understanding of the past has worn thin, and when cultural and civic value are under siege.

America is not a perfect country, but it is a great one. Given its overwhelming success and its profound role in the world, it shouldn’t be impossible or difficult to defend the ideas that made it great or the great men and women, empowered by those ideas, who brought us to where we are today.

Academia and the elite media don’t understand this, but the American people generally do.

In an age of rapid demographic and economic transformation, Reagan’s informed patriotism is needed now more than even if we want the 21st century to be the “American century” too.