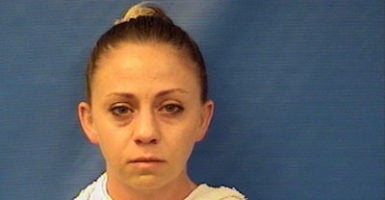 Amber Guyger, 30, has been charged with manslaughter after shooting dead a man in his home in Dallas on Sept. 6. (Photo: Kaufman County Sheriff''s/ MEGA / Newscom)

The Dallas Police Department fired off-duty officer Amber Guyger at a hearing Monday after she was charged with manslaughter for the Sept. 9 fatal shooting of her neighbor Botham Jean.

Guyger had worked for the Dallas Police Department since 2013 and “has the right to appeal her discipline,” according to a Dallas Police Department press release Monday. She had been on administrative leave since the shooting, reported The Dallas Morning News. Police Chief U. Renee Hall waited until the criminal investigation was complete to make an administrative decision about Guyger, Hall’s chief of staff Thomas Taylor said.

“As an employer, DPD can compel Officer Guyger to provide a statement during a DPD administrative investigation and those statements given to DPD could potentially compromise the criminal investigation,” Hall said in a statement.

Guyger, 30, is white and lived in the same apartment building in Dallas that 26-year-old Jean, a black man, resided in. Guyger told authorities she mistook Jean’s apartment for her own and thought Jean was a burglar when returning from a shift Sept. 9.

Guyger found the door to the apartment open and saw Jean’s “large silhouette,” she said, according to The Washington Post. When he did not respond to commands that she shouted at him, Guyger allegedly shot and wounded Jean in the torso, and he later died in the hospital.

“There are witnesses who said that before the gunshots, they heard the officer knocking at the door and repeatedly saying, ‘Let me in,’” Merritt told The Washington Post.